Unheralded Red Knights stand out in win over Hornets

Ellings scored for the third consecutive game and a trio of BSM players added two assists.

With a playoff-type aura surrounding the teams' third game of the season, it was the hosts who got on the scoreboard first when Nate Schweitzer intercepted a pass at the red line and rushed the net, skating through the Edina defense, which was heading up ice.

His first attempt failed to beat Hornet goalie Loudon Hogg but Cooper Gay and Logan Lyke both had rebound attempts before Schweitzer poked home a loose puck in front of the net just 2:41 into the game.

Edina tied the game when Jimmy Clark scored on the power-play with four minutes to play in the opening frame and the team's would go into the first intermission tied at 1-1.

It was Thompson, who scored just five points in 22 games last season, and Lyke, who played just two varsity games a year ago, who set up BSM's second goal as well as Lyke won a faceoff in his own zone and Thompson kicked the puck to Charlie Warnert, who rushed the puck to the Edina a flipped a puck on goal that eluded Hogg. 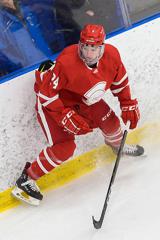 Will Thompson was one of three Red Knights to record a pair of assists. 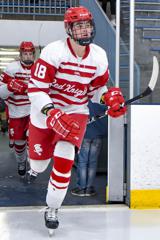 Ellings goal came four minutes later as Tristan Sarsland passed the puck from atop the slot to Ellings on the right-wing boards. He gave the puck to Cooper Gay along the end boards and cut to the net, receiving a return pass, which he buried for a 3-1 Red Knight lead with 8:23 to play in the middle frame.

Edina answered just 31 seconds later when Jake Boltmann talled and Jackson Borst tied the game at the 3:30 mark of the final period. Emmett Wurst and Mark Overman assisted on both goals.

Much of the game featured the team's racing up and down the ice, totaling a combined 70 shots on goal, with BSM holding a 37-33 edge.

Jack Olson won his second game of the season and sixth of his career, without a loss, by stopping 30 shots.

Up next for the Red Knights, after an 11-day hiatus, is the North/South Challenge, where BSM will host Brainerd, Dec. 6, and Class A No. 2 Hermantown, Dec. 7.