Limesand shuts out Brainerd in return to lineup

First-period goals hold up for Red Knights in 2-0 win.

ST. LOUIS PARK, Minn. -- Nate Schweitzer and Charlie Bischel scored in the first period and Carson Limesand record 19 saves and made the two goals stand up for Benilde-St. Margaret's in a 2-0 win over Brainerd in the North/South Challenge.

Schweitzer's goal came just 63 seconds into the game as the Red Knights got an early power-play. The goal, his second of the season, came on a one-time slap shot off from inside the blue line at the top of the slot off a pass from Blake Mesenburg.

Bischel's goal was a highlight-reel type goal as he picked up the puck on the right side as he headed up the right-wing board. Once inside the Warriors' blueline, he used a forehand-to-backhand move to split two defensemen and deked Brainerd goalie Luke Saiko before sliding the puck under him, giving BSM a 2-0 lead 1:50 to play in the first period.

BSM will close out the North South Challenge when it takes on Class A No. 1 Hermantown in a game slated for a 2 p.m. faceoff, Saturday. 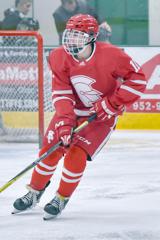 Charlie Bischel scored a key insurance goal in his first game of the 2019-20 season.