ST. LOUIS PARK, Minn. -- Benilde-St. Margaret's put on a dominating performance, using a 44-9 advantage in shots on goal to claim a 2-0 win over Brainerd in the North/South Challenge.

A 21-shot second period followed a scoreless opening frame, in which the Red Knights held a 9-2 advantage in shots on goal. However, it took 26 shots in 36 minutes before the hosts finally got on the scoreboard when AJ Pauly scored his second goal of the season with 4:08 to play in the stanza.

Just over three-and-a-half minutes later, Gino Gatti's goal made it a 2-0 game and it appeared that BSM had finally broken through and would carry that momentum into the third period.

However, Jed Klang stopped all 14 shots he faced in the final period to keep the Warriors in the game.

But Sam Schumacher managed to stay focused despite seeing just nine shots to record his first win and shutout.

Next up for the Red Knights is their final game of the North/South Challenge, a 12 p.m. faceoff versus Hermantown. 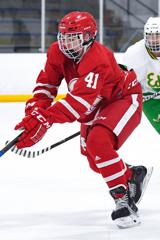 Gino Gatti's goal in the final minute of the second period capped a 21-shot spree in middle stanza.