BSM battles to 2-2 tie with Hermantown

Red Knights come from behind to earn 2-2 draw with Class A top-ranked Hawks.

This year, on the Red Knights' home rink, things were expected to be little different as the hosts came in ranked ninth in Class AA and the Hawks were number one in Class A.

When Hermantown scored just eight seconds into the game and went up 2-0 at the game's 6:23 mark, it appeared things may be very different.

However, BSM buckled down defensively, scored twice in the second period and fought back for a 2-2 tie.

The Hawks won the opening faceoff and Blake Biondi, after winning the draw, snuck in behind the Red Knight defense and took a pass from Joey Pierce before going in all alone on Carson Limesand for the game's first goal.

Biondi, who has committed to Minnesota-Duluth, set up Hermantown's second goal when he intercepted a pass off the boards and backhanded a pass from the slot to Ethan Lund, who was cutting to the net from the right side and slammed home the pass before Limesand could come back to cover the right post.

From that point, Limesand would stop all 23 shots he faced to give his team a chance to come back.

It was two quick goals that got the Red Knights back in the game in the second period. 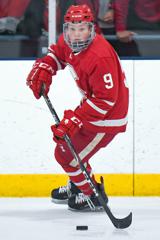 Adam Marshall's team-leading fourth goal of the season tied the game at 2-2.

The first goal started with Cooper Gay rushing the puck up the left side before getting off a shot which was stopped by Hawks' goalie Jacob Backstrom. The rebound came out to Asher Connolly, who quickly feed the puck to James Callahan coming down the slot.

Backstrom stopped the second shot but the rebound came out to the left circle, where Jackson Bisson came from behind the play and buried his third goal of the season at 7:06.

It took just 75 seconds for BSM to produce the tying goal as Nate Schweitzer carried the puck up the middle and passed to Grant Ellings on the left side as he crossed the blue line.

Ellings found Adam Marshall, who led the team with 10 shot attempts, in the left circle and his pass to Schweitzer hit traffic and deflected into the net, giving him his fourth goal of the season and his team a 2-2 tie.

After combining for four goals in just over 25 minutes, neither team would scoring in the final 33 minutes, 39 seconds, before settling for the tie.

Not only was the score tied, both teams had 30 shots on goal and two power-play chances.

Up next for the Red Knights is 16th-ranked St. Thomas. The two teams are slated to meet Wednesday at the St. Louis Park Rec Center at 7 p.m.