Late goal too much to overcome for BSM.

ST. LOUIS PARK, Minn. -- Johnny Woodford scored his first career goal to give Benilde-St. Margaret's a 1-0 lead and Adam Marshall notched his team-leading fifth goal of the season with five minutes, 30 seconds, to play in the game.

In between, St. Thomas scored three times and the 16th-ranked Cadets upset the ninth-ranked Red Knights, 3-1.

The game-winning goal came just 40 seconds before Marshall's goal when Connor O'Brien converted a Jackson Hallum rebound for his first goal of the season.

Woodford's first goal came as the Red Knight fourth line took the ice for just its second shift of the game for an offensive zone faceoff with 2:51 to play in the opening frame. 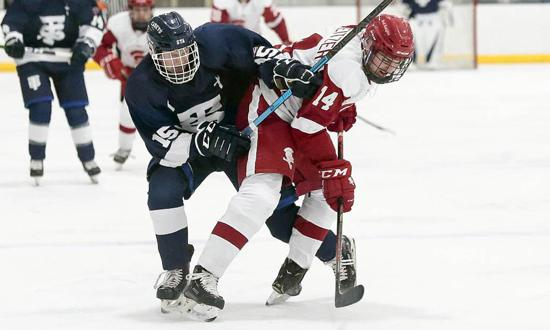 Nate Schweitzer extended his point-scoring streak to six games with by setting up both Red Knight goals. (Photo by Cheryl A. Myers, SportsEngine)

Woodford won the draw in the right circle to Nate Schweitzer at the right point and then headed for the net. Schweitzer patiently waited for a shooting lane before firing a shot which Woodford redirected into the net.

St. Thomas, which had an 8-3 advantage in shots on goal in the opening period, came out quickly in the second period with Tyler Grahme scoring just 49 seconds into the period.

Will Soderling gave the Cadets the lead for good when he converted a Tommy Deverell rebound with 7:35 remaining in the middle stanza.

After O'Brien's third-period goal gave his team a two-goal lead, BSM found itself on the power play just 35 seconds later and the Red Knights needed just five seconds for the puck to go from Blake Mesenburg's faceoff win in the left circle, to James Callahan at the left point.

Callahan moved the puck to Schweitzer above the slot and Marshall tipped his shot as he moved from left to right in front of the St. Thomas net.

The Red Knights pressured their guests throughout the final period, holding a 12-6 advantage in shots on goal, but Tommy Aiken stopped 11 of those 12 shots, stopped 22 of 23 shots in the final two periods and finished with 24 saves.

BSM returns to action Saturday, taking on Armstrong/Cooper in a 2:30 p.m. matinee.