CDH's first two goals came just 35 seconds apart and set the Red Knights back on their heels for most of the opening period.

BSM would own a 24-13 advantage in shots on goal over the next two periods but it wasn't enough at Drew Fisher scored with 1:19 to play in the middle stanza to sent the Raiders into the second intermission with a 3-0 lead.

Adam Marshall finally got BSM on the scoreboard with his sixth goal of the season with 11:58 to play but Jack Nei's second goal of the game was a highlight-reel breakway with 5:01 to play and, for all intent and purposes, end the Red Knights' comeback bid.

BSM returns to action, Dec. 26-28, with the Tradition in Park tournament. The Red Knights' first game is a 5 p.m. affair, Thursday, versus Holy Family. They will follow that with 12 noon game, Friday, against eighth-ranked Lakeville South before finishing the 2019 portion of their schedule, Saturday, with a 5 p.m. game versus Minnetonka. 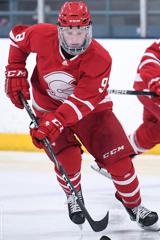 Adam Marshall scored his sixth goal of the season to account for the Red Knights lone goal.