BSM wins twice, loses finale at Tradition at the Park

Red Knights earn a pair of victories in holiday event.

ST. LOUIS PARK, Minn. -- Benilde-St. Margaret's won its first two games in the Tradition at the Park before falling in their finale to finish 2-1-0 and head into the new year with a 6-4-2 record.

The Red Knights saw the lead change three times in their 4-3 win over Holy Family, settling the game with Jackson Bisson's goal with four minutes to play in the game.

Friday, after skating to a 2-2 tie through the first period, Jonah Mortenson scored goals 1:56 apart and BSM cruised to a 6-2 decision. over Lakeville South.

However, coming off the win over the seventh-ranked Cougars, the Red Knights dropped a 3-1 decision to Minnetonka, giving up a late power-play goal and an empty-net goal.

Benilde-St. Margaret's took a first-period lead, saw Holy Family take a 2-1 lead before the Red Knights rebounded with a pair of goals to take a 3-2 lead.

The Fire tied the scored again with just over six minutes to play before Bisson's goal sealed the win for BSM.

Bisson also factored in the game's first goal, knocking down a shot by James Callahan, which Jonah Mortenson then turned into a power-play goal with four minutes, 41 seconds to play in the opening period.

Holy Family, however, scored the game's next two goals before Charlie Warnert knocked home a loose puck just 38 seconds after his team fell behind, sending the game into the second intermission, tied 2-2.

Adam Marshall scored on the power-play, 4:07, into the final period but the Fire tied the game once again when Grant Limke scored with 6:09 to play in the game, setting up Bisson's late-game heroics, sneaking behind the Holy Family game before banging home a loose puck for the win.

Although the score was close, the shots on goal were not as the Red Knights held a 39-22 advantage, with Carson Limesand stopping 19 shots to earn the win. 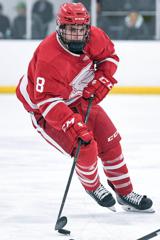 Jackson Bisson's goal with four minutes to play snapped a 3-3 tie and proved to be the game winner. 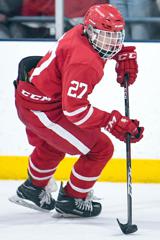 Jonah Mortenson found his goal-scoring touch at the right time.

After failing to score in the season's first nine games, he scored his first goal of the season, Thursday, but his back-to-back goals, one minute, 56 seconds apart in the second period were key tallies, snapping a 2-2 tie and sending the Red Knights to a 6-2 win.

Seamus Foley ended a 41-game goal-scoring drought just 3:34 into the game when he finished a 4-on-3 rush by burying a cross-slot pass from Cooper Gay.

It took just 89 seconds for the Cougars to answer but, with 4:14 to play in the period, Charlie Bischel restored the lead when Tristan Sarsland knocked down a pass in the neutral zone that wound up on the stick of Asher Connolly.

Connolly and Bischel turned quickly up ice and Connolly gave up the puck at the blue line. Bischel then skated the puck to the top of the right circle before snapping a shot past a South defenseman and into the back of the net.

Jack Malinski's power-play goal with 1:46 remaining in the period tied the game again and the scored remained that way until 5:28 remained in the second period.

Mortenson scored both of his goals by using his six-foot, 200-pound frame to muscle his way to the net and convert a pair of rebounds from the left side of the Cougar goal.

Gay, who set up a pair of goals, then scored with 48 seconds to play in the second period as Tristan Sarsland intercepted a pass in the neutral zone, fed Gay entering the offensive zone and he converted his own rebound to a 5-2 lead.

The final goal came when Adam Marshall shot the puck the length of the ice and into an empty net with 1:16 to play in the game.

The 6-2 final capped a dominating performance against the seventh-ranked Cougars as BSM had a 62-15 advantage in shot on goal, stepping on the gas in the final period, when the Red Knights out-shot South, 26-3.

Tyler Kueppers scored twice, including a power-play goal with 4:46 to play, to help Minnetonka get past Benilde-St. Margaret's, 3-1, on the final day of the Tradition at the Park.

After scoring the game's first goal, five minutes, 52 seconds into the second period, the Skippers and Red Knights finished the middle frame tied in shots on goal, 19-19.

BSM scored first in the third period to tie the game, with Tristan Sarsland's shot from the right point finding its way through traffic at 3:26 of the final frame.

The Red Knights held a 19-10 advantage in shots on goal in the final period but could not beat Minnetonka goalie Brandon Shantz again as he finished with 37 saves.

Kueppers scored the eventual game-winning goal with a power-play tally with 4:46 to play and Teddy Lagerback's empty-net goal with seven seconds to play sealed the win.

BSM goalie Carson Limesand turned aside 26 of the 28 shots he faced as the Red Knights wrapped up 2019. 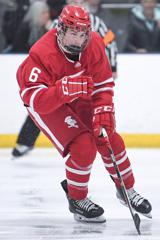