MOORHEAD, Minn. -- Charlie Frattalone stopped 37 shots, including 17 of 18 in the final period, and Mitchell Dokman recorded his third consecutive two-goal game as the Benilde-St. Margaret's junior varsity overcame an early deficit to earn a 5-2 win at Moorhead.

The Spuds took an early lead, seven minutes, three seconds into the game when they scored on a major power play but, after being assessed minor penalty, the team's were skating 4-on-4 when Dokman struck for his first goal.

Gino Gatti's third goal of the season, with 2:32 to play in the opening period, was another 4-on-4 goal and game the Red Knights a 2-1 lead, which they would not relinquish.

Quinn Schliesman scored 1:46 into the second period for the only goal of the middle stanza and BSM held a 3-1 entering the final period.

Penalties were nearly BSM's undoing in the third period as the Red Knights game up four power-play chances, three of which came in a four-minute span early in the period, two of which were due to being called for too many players on the ice.

The hosts took advantage as Kenny Bohney scored midway through the frame to close the gap to one goal but, while working on their eight penalty-kill of the game, BSM regained its two-goal lead when Ryan Gearen took a long pass from Mason Baldwin at the red line and proceeded to score his fourth short-handed goal of the season. 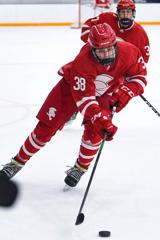 A sequence of penalties in the game's final two minutes then saw the Red Knights skating with a 5-on-3 power-play advantage and Dokman struck for his 10th goal in six games with just 26 to play in the game.

Despite giving up two power-play goals, Frattalone stopped 14 of Moorhead's power-play shots, including 9 of 10 in the third period, finishing with 17 stops in the final frame while turning in a season-high 37-save effort.

Besides Dokman's two-goal performance, his fourth in six games which extended his goal-scoring streak to six games, four other Red Knights turned in multiple-point performances, led by Baldwin's three-assist outing.

Gearen, Schliesman and Gatti all registered a goal and an assist in the victory, which raises BSM above the .500 mark for the first time this season, at 5-4-2.

Next up for BSM is a trip to the east side of the Twin Cities, Tuesday, when the Red Knights will be at Aldrich Arena for a 5 p.m. meeting with Hill-Murray.