BSM JV comes from behind for win over Chaska

ST. LOUIS PARK, Minn. -- It took the Benilde-St. Margaret's junior varsity more than half the game before it put up a goal on the scoreboard.

The Red Knights would control much of the final 26 minutes of the game, adding a pair of third-period goal, to come from behind for a 3-1 win over Chaska.

Neither team scored in the opening 15 minutes but Chaska's Gabe Kinneman struck three minutes, 36 seconds into the second period to give the visitors a 1-0 lead.

Six minutes later Quinn Schliesman, coming off a hat trick two days ago, tied the game with a short-handed tally, the team's seventh of the season as opposed to six power-play goals allowed.

It was on special teams that BSM got the game-winning goal as, just 1:54 into the final period, Schliesman set up Ben Thompson at the top of the slot and his shot found its way through traffic for a power-play goal.

The Red Knights then added an insurance goal when team scoring leader Mitchell Dokman scored with 8:23 to play in the game, giving him 14 goals in 14 games on the season.

BSM was able to overcome its 1-0 deficit in large part to goalie Jack Olson, who stopped the final 14 shots he faced, finishing with 31 stops to earn the win. 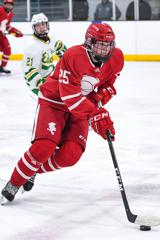 Quinn Schliesman followed Thursday's hat trick with a goal and an assist versus the Hawks.

The Red Knights are in the midst of a four-game in eight-days stretch and are scheduled to play the third of those four games Tuesday, beginning at 5 p.m., versus Blake at the St. Louis Park Recreation Center.