Hawks use three-goal lead to down Red Knights

BSM dominates much of game but unable to secure win.

Although the Red Knights outshot the Hawks in all three periods, the shots were tied, 13-13, when Nick Omscheid scored on the power-play to give the visitors a 3-0 lead.

From that point, BSM would hold a 22-9 advantage in shots on goal but each team scored twice, with Chaska scoring an empty-net goal to seal the win.

The Red Knights scored both of its goals on the power-play, despite missing captain and power-play points leader Nate Schweitzer.

With Schweitzer out, sophomore Brady Yakesh stepped up and took his spot on the first power-play unit.

Yakesha missed the first 12 games of the season due to injury and had not record a point in his first three games back in the lineup. He resolved that by setting up Blake Mesenburg for the Red Knights' first goal, with 2:20 to play in the second period, cutting the Hawks' lead to two goals entering the second intermission.

Chaska then scored midway through the final period to restore the three-goal lead before Yakesh's blast from the left point with 5:34 to play in the game. 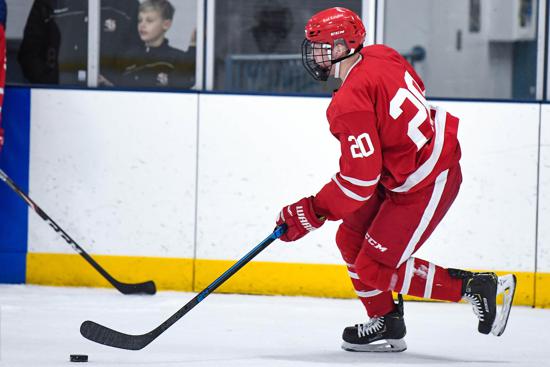 Pressuring their guests, BSM pulled goalie Carson Limesand for an extra attacker with 3:26 to play. However, with the extra attacker, the Red Knights managed just one shot on goal before Zach Seltun sealed the game with an empty-net goal with 1:26 to play.

After a two-day rest, the Red Knights return to action, Tuesday, as they host eighth-ranked Blake at the St. Louis Park Recreation Center. Game time is slated for 7 p.m.