Frattalone posts 24-save shutout to lead Red Knights to victory.

ST. LOUIS PARK, Minn. -- Charlie Frattalone made 24 saves and Benilde-St. Margaret's got goals from Ryan Gearen and Quinn Schliesman, posting the team's third shutout of the season in a 2-0 junior varsity win over Blake.

It took until the midway point of the second period before Gearen finally broke a scoreless tie.

Gearen won a faceoff in the right circle of the Bears' zone to Bjorn Lervick at the point. Lervick's shot was wide of the net but came around the boards, where Mitchell Dokman picked it up on the right side. He got the puck to Gearen, who walked the puck to the net, made a move around goalie Jonah Spaeth and tucked home his 10th goal of the season.

The game continued to be a battle of goaltenders and the Red Knights continued to hold onto their 1-0 lead into the final two minutes of the game.

Blake pulled Spaeth for an extra attacker but couldn't generate the opportunity which would lead to the game-tying goal.

Finally, Gino Gatti poke checked the puck loose at the Bears' blueline. A.J. Pauly then tipped the puck to Quinn Schliesman, who got around a Blake defenseman before depositing the puck into the empty net.

BSM had a 33-24 advantage in shots on goal with Frattalone recording his first shutout of the season, while Spaeth stopped 31 of the 32 shots he faced.

Next up for the Red Knights is a return to Metro West Conference play as they host Chanhassen, Tuesday, starting a 5 p.m. 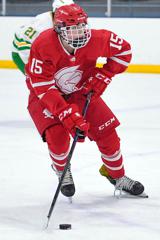 Ryan Gearen's second-period tally was his 10th of the season.