Gearen scored just 52 seconds into the game but, midway through the period, the Storm's Connor VanDaalen scored the equalizer with 7:47 gone in the contest.

It took just 40 seconds for BSM to take the lead for good as Gearen scored his second goal of the game and 12th of the season.

He once again scored in the first minute of a period, scoring the first of the Red Knights' three power-play goals just 36 seconds into the period and, 92 seconds later, he tacked on another power-play goal to give his team a 4-1 lead.

Before five minutes were gone in the middle frame, Nick Graczyk tallied his first goal of the season and, in the final minute of the period, just 28 seconds apart, Aiden Wahlstrom and Vince Ferris scored goals before the teams skated through a scoreless third period.

BSM had a 46-9 advantage in shots on goal and allowed just one power-play opportunity, going 3-for-7 itself with the man advantage.

The Red Knights will play their fifth game in 10 days, Saturday, when they take a break from Metro West Conference play for a non-conference game, beginning at 12 p.m., at Holy Angels. 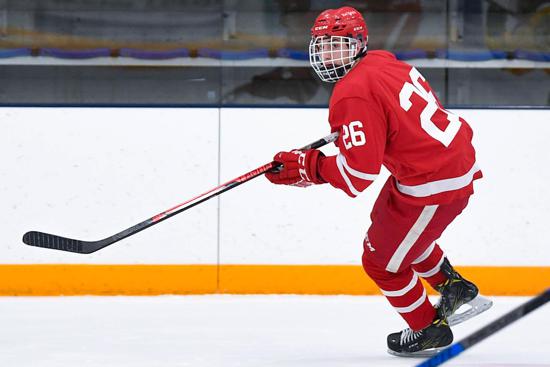 Aiden Wahlstrom had a goal and four assists in the win.