BSM dominant in win over Chanhassen

It took the Red Knights 14 minutes, 30 seconds before they got on the scoreboard as Gay took a pass from Jonah Mortenson to the left of the Storm goalie, He fought his way behind the net, came out in the right circle and beat goalie Josh Weyandt on the short side.

Weyandt kept his team in the game for two periods as he stopped 40 of 41 shots in the first 34 minutes, but BSM broke through for three goals in the third period.

The first goal came just 48 seconds into the final frame when Grant Ellings, on the penalty kill, picked up a loose puck in his own zone and raced up the left side. He centered the puck to Blake Mesenburg in the middle of the slot in the other end of the ice and the Red Knight co-captain tipped home the pass for a 2-0 lead.

Four minutes later, Gay would strike for his second goal of the game, and team-leading 10th of the season, when he redirected a pass from Mesenburg between Weyandt's legs.

The final goal came with 3:44 to play as Adam Marshall, after being knocked to the ice, managed to tip a Tristan Sarsland shot from the left point.

Charlie Frattalone, making his second start of the season, was the recipient of the Red Knights offensive efforts. He faced just six shots, stopping all of them, to record his first career shutout.

Next up for BSM is a Saturday meeting with Holy Angels, scheduled for 2 p.m. at the Richfield Ice Arena. 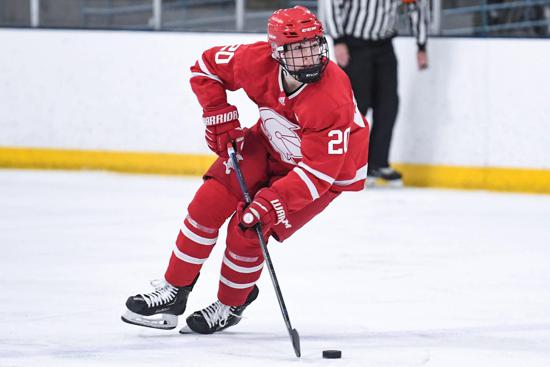