RICHFIELD, Minn. -- Benilde-St. Margaret's scored three times in the third period, breaking a 2-2 and earning a 5-2 win over Holy Angels.

After the hosts scored the lone goal of the second period, tying the score at 2-2, Ryan Gearen won the opening faceoff of the third period and immediately took the puck in on goal, scoring his sixth short-handed goal of the season.

The score remained that way until Mitchell Dokman scored into an empty-net with 58 seconds to play but, 13 seconds later, a BSM penalty put the Stars on their fifth power play of the game and, once again, they pulled goalie Mason Meyer for an extra attacker.

With 15 seconds to play in the game, Aiden Wahlstrom sealed the win, scoring his second goal of the game and the team's second short-handed goal as the Red Knights were 5-for-5 on the penalty kill.

BSM took a 2-0 lead in the first period as Wahlstrom and A.J. Pauly tallied goals before Jackson Biltz scored with 24 seconds remaining in the opening period, and then added the lone second-period goal to tie the game.

Jack Olson got the starting nod in goal and turned aside 22 of the 24 shots he faced as the Red Knights had a 36-24 advantage in shots on goal.

BSM now has a week off before returning to action next Saturday with a 5 p.m. Metro West Conference game versus Bloomington Jefferson. 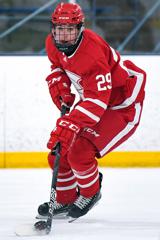 Nick Graczyk has a pair of assists and was +5 versus Holy Angels.