RICHFIELD, Minn. -- Benilde-St. Margaret's couldn't gain much traction in the first 20 minutes but racked up 43 shots on goal over the final two periods as the eighth-ranked Red Knights overcame a one-goal deficit en route to a 5-2 win at Holy Angels.

After a scoreless first period, in which the teams combined for 24 shots on goal, Peter Forseth put the Stars on the scoreboard first, two minutes, five seconds into the second period.

BSM answered just 78 seconds later when Cooper Gay buried a pass from Blake Mesenburg, extending his goal-scoring streak to three games while registering his team-leading 21st point of the season.

Just over two minutes later, Jonah Mortenson put his team up, 2-1, when he took a drop pass from Grant Ellings and snapped off a shot from the top of the slot.

After outshooting their hosts, 22-6, in the middle frame, the Red Knights picked up where they left off in the third period, and Adam Marshall finally made it a 3-1 game when Asher Connolly blocked a shot and raced into the Holy Angels zone.

In the left circle, he stopped and spun, leaving a backhand pass for Marshall to one-time over the left pad of Matthew Syverson. 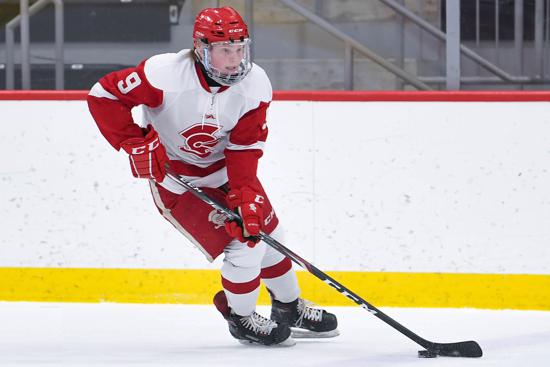 Adam Marshall scored the game-winning goal and sealed the win with a second tally with 2:30 to play.

Midway through the period, when a long rebound of a Grant Ellings shot came out to the top of the slot, Logan Lyke stepped up and his shot through traffic found the back of the net for his first goal since he scored in the season opener.

Rick Nelson got one goal back for the Stars, with 5:49 to play, but Marshall sealed the win when Tristan Sarsland intercepted a clearing attempt and drove to the net, where Marshall was waiting to slam home his 11th goal of the season.

Despite enjoying a 56-29 advantage in shots on goal, Carson Limesand earned his eighth win of the season, turning in a 27-save effort.

After playing five games in 10 days, the Red Knights are now idle until next Saturday, returning to Metro West Conference play with a 7 p.m. game versus Bloomington Jefferson at the St. Louis Park Recreation Center.