ST. LOUIS PARK, Minn. -- Benilde-St. Margaret's scored all four of its goals in the second period and 10 different players provided points as the Red Knights remained unbeaten in Metro West Conference play with a 4-2 win over Bloomington Jefferson.

BSM had a 12-4 advantage in shots on goal in the opening 15 minutes but the Red Knights failed to scored until 62 seconds into the second period when Quinn Schleisman redirected a Nick Graczyk pass to put the home team on the scoreboard.

It took just 68 more seconds for BSM to add a second goal when Kiernan Wickner banged home a loose puck for a 2-0 Red Knight lead.

Gino Gatti made it a 3-0 game a little more than four minutes later and, after the Jaguars got on the scored midway through the period, Ryan Gearen scored his team-leading 16th goal of the season with 2:09 to play in the middle frame.

Jefferson added a power-play goal with 1:14 to play in the game but, after being outshot 36-12, it was too little, too late.

Only two of the 10 Red Knights to register points on the night had multiple-point games.

Nick Graczyk notched his second consecutive two-assist game while Schliesman assisted on Gearen's goal to give him two points as well.

Sam Schumacher made 10 saves to raise his record to a team-leading 5-1-1.

Next up for the Red Knights is a break from conference play as they travel to St. Michael-Albertville for a 5 p.m. game, Tuesday. 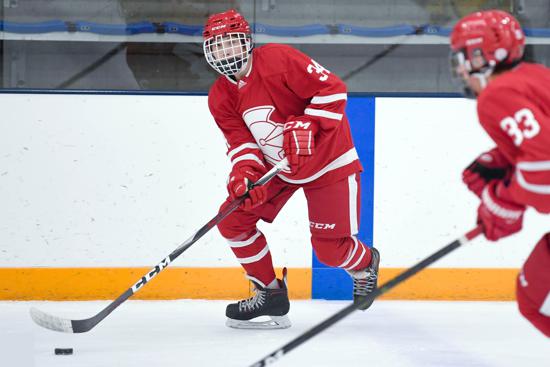 Kiernan Wickner ended a 10-game goal-scoring drought with his third goal of the season.