ST. LOUIS PARK, Minn. -- Twelve of 17 skaters recorded points, six of whom had multiple-point games, as ninth-ranked Benilde-St. Margaret's cruised to a 10-3 win over Bloomington Jefferson.

The Jaguars took the opening lead when Brady Burton scored at the six-minute, 57-second mark, of the opening period but Adam Marshall scored the first two of his three goals to give the Red Knights a 2-1 lead with 2:40 to play in the opening period.

Blake Mesenburg made it 3-1 just 24 seconds later and the hosts would never look back.

The eventual game-winner came off the stick of Tristan Sarsland, 2:27 into the second period, which was his first power-play tally of the season.

Jefferson would score again to make it a 4-2 game but Cooper Gay began work on his hat trick with a power-play tally at 6:01, followed 57 seconds later by James Callahan's third goal of the season.

The Jaguars third and final goal came with 3:25 to play in the middle stanza but, before the second intermission, Mesenburg stole a puck and raced in on the Jefferson goal before scoring a short-handed goal with 2:03 to play.

Both Gay and Marshall finished their hat tricks in the final period as Gay scored the first two goals of the final period, both of which were set up by Charlie Warnert, and Jackson Bisson's fourth assist of the game, and third on a Marshall goal, set up the Red Knight sophomore with 7:33 to play in the game. 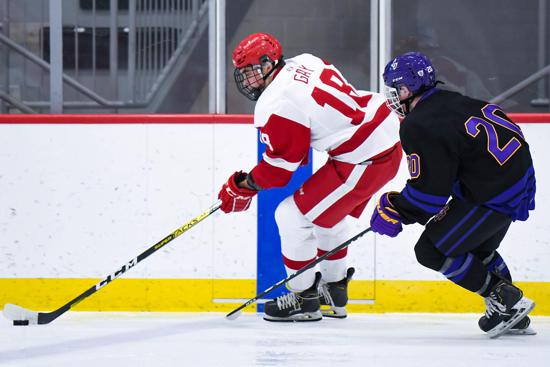 Cooper Gay recorded his second hat trick of the season and recorded a career-best four points versus Jefferson.

Next up for the Red Knights is a non-conference game, Tuesday, beginning at 7 p.m., at St. Michael-Albertville.