BSM jumped out to a quick start with two goals in the first five minutes as Quinn Schliesman scored three minutes, 12 seconds, into the game and, 73 seconds later, Ryan Gearen scored his seventh short-handed goal of the season.

With 2:11 to play in the opening period, Gino Gatti's sixth goal of the season sent the game into the first intermission with the Red Knights holding a 3-0 lead, despite being out-shot 16-11.

Gearen's team-leading 18th goal of the game came 5:57 into the middle period, giving BSM a 4-0 lead, before the Knights got on the scoreboard with 4:25 to play in the frame.

However, just 62 seconds later, Vince Ferris picked up his third goal of the season and, after the hosts cut the lead to three goals again, 1:35 into the final period, it was Ferris who sealed the win with an empty-net goal with 38 seconds to play, marking his first two-goal game of the season.

Schliesman and Gatti both added an assist and Mitchell Dokman had two assists to give the Red Knights five players with multiple-point games on the night.

Frattalone recorded his fifth 30-plus save game in six starts this season, as he raised his record to 3-1-1 on the season. 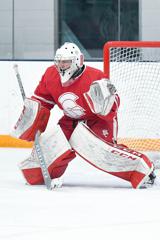 Charlie Frattalone stopped 16 shots in the opening period and finished with 33 saves.

The Red Knights return to action, Thursday, with a Metro West Conference game versus Chaska at the Chaska Community Center. Game time is set for 5 p.m.