The Red Knights took an early lead as A.J. Pauly scored just one minute, 47 seconds into the game.

After the Hawks scored three minutes later, the teams played scoreless hockey through the remainder of the opening 15 minutes.

Gino Gatti scored just under four minutes into the second period to give BSM a 2-1 lead and Mason Baldwin's goal, 86 seconds later, made it a 3-1 game.

A short-handed goal by Chaska's Garrett Pritchard with 6:25 to play in the period began the Hawks' rally. Bryce Hansen scored 70 seconds later and Jonny Knapp scored consecutive power-play goals, giving his team a 5-3 lead with 10 minutes to play in the game.

Amid a 19-shot third period, Aiden Wahlstrom scored on the power play for the Red Knights with 7:56 to play in the game but, despite a furious rally, which included six shots on goal during a power play in the final two minutes, the visitors were unable to come up with the equalizer.

The loss snapped a seven-game winning streak by the Red Knights, who return to action Tuesday, Feb. 11, when they return home to face Eden Prairie at the St. Louis Park Recreation Center, beginning at 5 p.m. 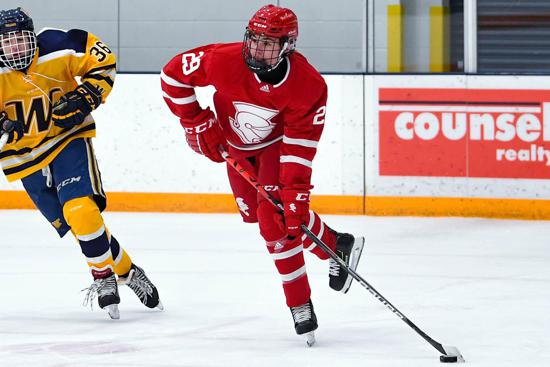 Nick Graczyk had an assist and recorded nine shots on goal.