Limesand's 30-save effort leads take down of conference-leading Hawks.

CHASKA, Minn. -- Seventh-ranked Benilde-St. Margaret's opened a three-goal lead and rode a 30-save effort by Carson Limesand to claim a 4-1 win at Chaska.

The Red Knights took a two-goal lead in the game's opening three minutes, 14 seconds, to set the home team back on its heels.

The game's first goal came via an offensive zone faceoff win by Adam Marshall. His draw came back to Logan Lyke who moved the puck across to Nate Schweitzer at the right point.

Schweitzer unloaded a shot through traffic, which handcuffed Hawks goalie Carter Wishart, to give BSM a lead just 89 seconds into the game. 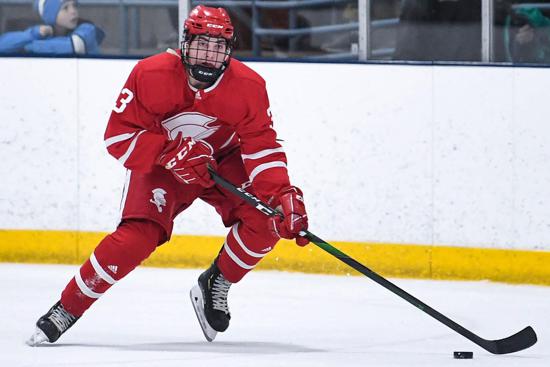 Logan Lyke registered his second two-assist performance of the season, giving him four assists in his last four games. 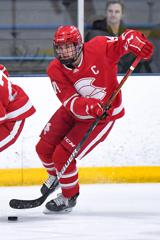 Nate Schweitzer scored the game's first goal and assisted on the final goal.

The second goal came 1:45 later when James Callahan moved the puck behind his net to Jonah Mortenson, who bumped the puck to Charlie Bischel inside the Red Knight blue line.

Bischel raced up the right-wing boards before cutting towards the net when he reached the offensive zone faceoff circle. He momentarily lost the puck when trying to make a move around a Chaska defenseman but regained possession and fired the puck past Wishart for his sixth goal of the season.

Despite being outshot, 24-19, in the first two periods, BSM would take a 3-0 lead late in the second period when Charlie Warnert forced a turnover along the left wall.

He turned with puck and passed it to Blake Mesenburg, who, in turn, used a Hawk defenseman as a screen and beat Wishart low to extend his point-scoring streak to five game.

Chaska finally got on the scoreboard when Zach Seltun scored with 1:53 to play in the second period but, barely three minutes into the final period, Ellings restored the three-goal and Limesand finished off his 11th win of the season.

The Hawks used a 5-0 advantage in power-play chances, tallying 14 shots, but went 0-for-5 as BSM extended its string of successful kills to 18, allowing their last power-play goal to Chaska in the teams' first meeting this season, Jan. 18.

The Red Knights enter the final week of regular-season play with a 14-6-2 record and will play three games in five days, beginning with a non-conference game at home versus third-ranked Eden Prairie. That game is slated for a 7 p.m. start at the St. Louis Park Rec Center, Tuesday.

They close out the season, Saturday, with a 3 p.m. game versus Bloomington Kennedy at the Bloomington Ice Garden.