Wahlstrom's third-period goal proves to be the difference in BSM win.

ST. LOUIS PARK, Minn. -- Benilde-St. Margaret's scored twice in the opening five minutes but need to come from behind to grab a 4-3 junior varsity win over Eden Prairie.

Nick Graczyk banged home a rebound on the power play just two minutes, 15 seconds into the game and, two minutes later, Mitchell Dokman converted a Ben Thompson pass to give the home team an early 2-0 lead.

The Eagles rebounded quickly, however, scoring goals 2:12 apart, tying the game on Ethan Poole's short-handed goal with 6:51 to play in the opening frame.

The visitors would then take the lead 2:15 into the middle period as Tyler Marble quickly converted a turnover in a 3-2 lead for the Eagles.

With a 26-13 advantage in shots on goal of the final two periods, BSM needed the play of Charlie Frattalone, who would stop the final 22 shots he faced.

The Red Knights even the scored again with 4:29 to play in the period with Quinn Schliesman notching his 14th goal of the season.

BSM regained the lead for good just 14 seconds into the final period when Ryan Gearn's pass from the left corner found Wahlstrom all alone in front of the Eagles' net and he slammed home his 10th goal of the season. 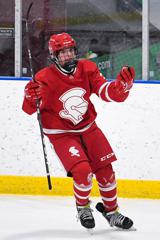 Mitchell Dokman scored one goal and assisted on two others.

Frattalone raised his record to 5-1-1 with a 30-save performance, which included a 13-save third period.

The Red Knights will play their third game in four days, Thursday, when they host cross-town rival St. Louis Park in the home finale for 2019-20. Game time at the St. Louis Park Recreation Center is slated for 5 p.m.