Ben Steeves scored a hat trick and the Mittelstadt brother, John and Luke, combined for seven points, to lead the Eagles.

John Mittelstadt scored the game's first goal, just one minutes, 29 seconds into the opening period and added a short-handed goal with 1:28 remaining in the second period, which gave Eden Prairie a 5-1 lead.

Steeves scored two of his goals on the power play to end the Red Knights' streak of consecutive penalty kills at 18.

His first goal made the score 2-0 but Cooper Gay cut the lead in half with his team-leading 17th goal of the season for BSM, with 5:58 remaining in the opening frame.

However, the Eagles would score four consecutive goals, including back-to-back short-handed goals by John Mittelstadt and Carter Batchelder, who scored just 26 seconds into the final period.

Asher Connolly scored the game's final goal, his first goal of the season, less than four minutes later and the teams skated through a scoreless final 13 minutes. 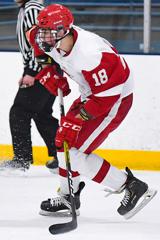 Cooper Gay's team-leading 17th goal of the season got BSM on the scoreboard in the first period.

BSM closes out the regular season, Saturday, with their final conference game of the season at Bloomington Kennedy. Game time at the Bloomington Ice Garden is slated for 3 p.m.

Section 6AA pairings will then be announced Sunday with the Red Knights playing a quarterfinal game next Thursday at 7 p.m.