ST. LOUIS PARK, Minn. -- A.J. Pauly recorded his first hat trick of the season and seven players recorded multiple-point games as the Benilde-St. Margaret's junior varsity closed out the home portion of its 2019-20 schedule with an 8-2 win over crosstown rival St. Louis Park.

A pair of four-goal periods, in the first two stanzas, allowed the Red Knights to coast through the third period on running time and into the six-goal victory.

It all four minutes into the game as Ryan Gearen scored his 20th goal of the season, becoming the first BSM JV player to reach the 20-goal plateau since Joe Collins in 2015-16.

Three minutes later, Aiden Wahlstrom scored a short-handed goal but, on the same power play, the Orioles got on the scoreboard and, midway through the period, it was a 2-1 game.

Pauly's first goal of the game came with 2:59 to play in the opening period and, 1:27 later, Ben Thompson made it a 4-1 game to close out the scoring in the first 15 minutes.

BSM dominated the second period, out-shooting St. Louis Park, 23-5. Again, it was a 4-1 scoring period in favor of the Red Knights, which got underway when Pauly scored on a goal-mouth scramble, 3:18 into session.

The team's two lead scorers then accounted for the next two goals as Mitchell Dokman scored his 18th goal of the season at 8:03 and Gearen got his 21st when he scored on a solo rush with 3:32 remaining in the middle period. 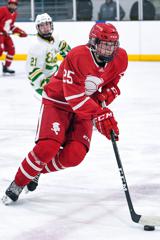 Quinn Schliesman set up all three of Pauly's goal.

Pauly wrapped up his hat trick, and BSM's scoring, just 24 seconds later before the Orioles scored their second power-play goal with 42 seconds to play in the period.

For the game, the Red Knights enjoyed a 38-14 advantage in shots on goal. Sam Schumacher made 12 saves in record his team-leading sixth win of the season.

BSM wraps up its season, Saturday, as it takes on Bloomington Jefferson. Game time at the Bloomington Ice Garden is slated for 1 p.m.