Win over cross-town rival Orioles puts BSM with one win of conference title.

ST. LOUIS PARK -- Eight Benilde-St. Margaret's seniors were sent off with a victory in the final regular-season home game at the St. Louis Park Rec Center as the seventh-ranked Red Knights posted a 4-0 win over St. Louis Park.

The hosts got the only goal they would near just three minutes, 15 seconds into the game when Will Thompson intercepted an errant Oriole pass in front of the visitors' bench and found Jackson Bisson coming down the slot, from where he notched his first short-handed goal of the season.

Despite a sizable advantage in shots on goal, 29-14, through two period, it took until 3:25 remained in the second period for BSM to get on the scoreboard again as William Pinney kept St. Louis Park in the game.

On a scramble in front of the net, Pinney kicked out a rebound to the top of the slot, where Blake Mesenburg, coming from the bench on a line change, one-timed the puck over the goalie's glove to give his team a 2-0 lead.

Mesenburg struck again 5:39 into the final period as Charlie Warnert intercepted a pass at the top of the right circle and immediately created a 2-on-1 down. He got the Orioles' defenseman to commit to a poke check but Warnert got off a pass to Mesenburg, who snapped a shopped past Pinney's blocker from the left side of the slot. 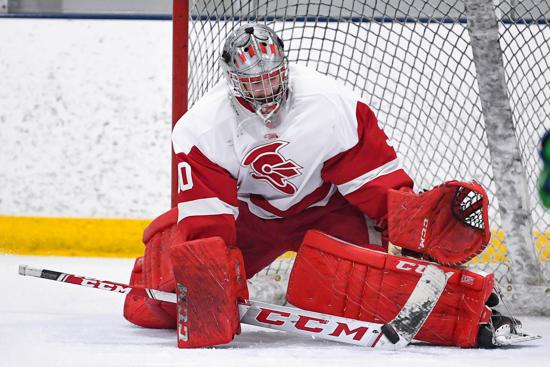 The visitors made one last attempt to get in the game as they pulled Pinney for an extra attacked. The move backfired, however, as Jonny Woodford won a faceoff in his own zone and pushed the puck through the skates of his opposing centerman.

Thompson immediately picked up the puck, raced out of his own zone and to the right-wing boards. After crossing the red line, he he deposited a shot in the middle of the St. Louis Park net with 15.8 seconds remaining on the clock.

The win moved BSM into a tie for first place in the Metro West Conference standings with Chaska. Both teams have one game remaining on their schedule, Saturday, but the Red Knights will play for four points and will win their fourth conference title in six years with a victory.

That four-point game will be at the Bloomington Ice Garden, Saturday, beginning at 3 p.m. as BSM takes on Bloomington Kennedy in the regular-season finale.

The Red Knights will then learn their Section 6AA seed, Sunday, when the pairings for the section playoffs are announced. Quarterfinal games are scheduled for Thursday, Feb. 20, at 7 p.m