BLOOMINGTON, Minn. -- Fourteen different players recorded points and Benilde-St. Margaret's wrapped up the Metro West Conference title for the fourth time in six seasons with a 10-0 win at Bloomington Kennedy.

Ten of those 14 players had multiple-point games, led by Charlie Warnert, who scored twice, and Tristan Sarsland, Nate Schweitzer and Cooper Gay, all of whom recorded three assists.

Although rolling up 51 shots and 10 goals, the Red Knights entered the first intermission leading by only a goal as Grant Ellings' goal, with six minutes, six seconds remaining in the opening period, gave his team a 1-0 lead.

The scoring picked up in the second period for BSM as Blake Mesenburg scored two of the first three goals in the period, sandwiched around Warnert's first goal.

Asher Connolly would add his second goal of the season before the period was over and the Red Knights took a 5-0 lead into the third period.

A five-goal third period put an emphatic stamp on the victory as Adam Marshall and Ellings scored goals 58 seconds apart in the first 2:04 of the frame to get things rolling again for seventh-ranked BSM.

There would be nearly a nine-minute gap between tallies before Jackson Bisson scored with 6:18 to play and Warnert and Brady Giertsen followed up to complete the 10-goal rout. 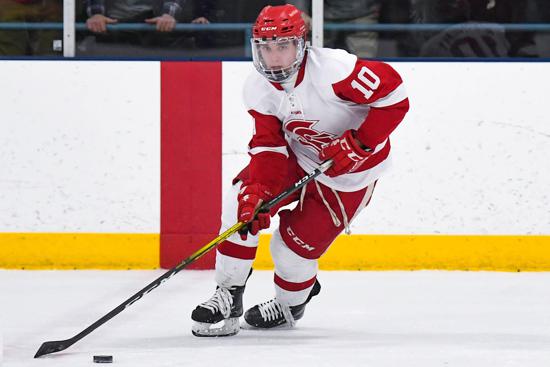 Charlie Warnert recorded his first two-goal game of the season in addition to a season-high three points.

Sarsland not only was one of four players with three points in the game, he also registered a game-high seven shots and led the Red Knights with a plus-six rating.

Carson Limesand, who made five saves in the opening period before seeing just two shots over the final 34 minutes, recorded his second consecutive shutout and 13th of his career.

With back-to-back shutouts, he now sports a consecutive shutout streak of 118:34.

The Red Knights will begin Section 6AA play with a quarterfinal game, Thursday, beginning at 7 p.m. The opponent and site will be determined at Sunday's seeding meeting and announced in the afternoon.