ST. LOUIS PARK, Minn. -- Benilde-St. Margaret's took a 4-0 lead to start the game but needed third-period goals from their goal-scoring leads, Adam Marshall and Cooper Gay, to hold of Holy Angels for a 6-4 win in a Section 6AA quarterfinal.

The seventh-ranked Red Knights scored three times in the opening period and added a fourth just 73 seconds into the second period before the Stars started working on a comeback effort.

It took BSM nearly 10 minutes to get on the scoreboard before Blake Mesenburg buried a Charlie Warnert pass at the game's 9:51 mark.

The Red Knights then caught fire, scoring four goals in a nine-minute span.

BSM took a 2-0 lead when Grant Ellings passed the puck along the boards from the right side, behind the net and into the left corner, where Charlie Bischel picked it up, walked out into the slot and, in his first game back after missing the final three games of the regular, fired home is seventh goal of the season.

With 1:05 remaining in the period, Brady Yakesh took a cross-ice pass from Asher Connolly and, from the top of the right circle fired a shot across Matthew Syverson's body and inside the far post for a 3-0 lead. 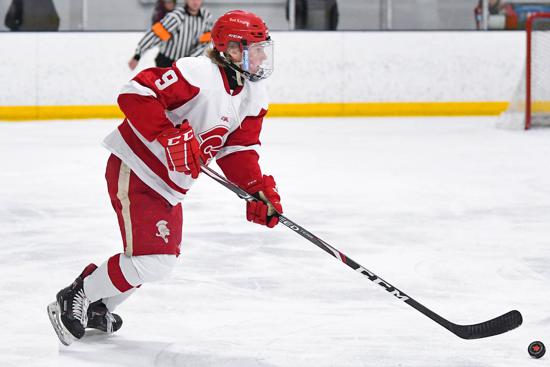 Adam Marshall's 17th goal of the season opened the third period and proved to be the game winner.

Nate Schweitzer collected his sixth goal of the season when his shot from inside the blue line found its was through traffic and past a screened Syverson to give the hosts a 4-0 lead.

It was the last goal BSM would scored for more than 22 minutes while Holy Angels worked on their comeback bid, getting goals 46 seconds apart midway through the period and a power-play goal 2:27 into the third period to cut the Red Knights' lead to 4-3. 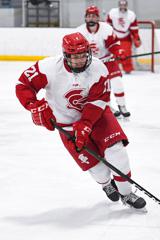 Asher Connolly had the primary assist on two of the Red Knights goals.

The home team got back on the scoreboard with 10:12 to play when Adam Marshall settled into the middle of the slot, took a pass from Connolly out of the right corner, and, after having two shots stopped, banged home his own rebound for a 5-3 lead.

Another Stars' power-play goal, with 5:50 to play, cut the lead to one-goal once again but then Cooper Gay, who has become known to scoring big goals this season, sealed the win.

The puck came out to James Callahan at the right point while Gay backed his way into the low slot. Gay then knocked down Callahan's shot out of midair, redirecting it past Syverson for his team-leading 18th goal of the season.

With the win, the Red Knights advance to Saturday's section semifinal, where they'll take on ninth-ranked and third-seeded Cretin-Derham Hall.

The Raiders handed BSM a 4-1 loss at the TRIA Rink, Dec. 21, and, in the teams' only other playoff meeting, Cretin-Derham Hall upset an unbeaten BSM squad in 2016 at the Bloomington Ice Garden.

The Red Knights and Raiders will, once again, meet at BIG in a game scheduled for 7 p.m. Preceeding the match up with be the other semifinal game, featuring top-seeded Blake and fourth-seeded, and defending state champion, Edina, at 3 p.m.