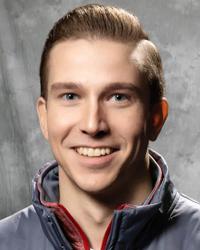 Casey Maikkula has handled social media and scouting duties previously for the Red Knights but joins the staff on a full-time basis and he will be on the bench during the 2020-21 season.

Maikkula took the time to answer some questions about his background and coaching for BSMHockey.com.

Get to know the Robbinsdale Cooper alum.

What do you do for work:

Currently, my primary focus is on all things BSM Boys Hockey; as an assistant coach and social media coordinator.  The ability to-so was largely afforded to me by successes in a previous career. Throughout college and shortly thereafter, I served as a social media consultant for small businesses, musicians, and eventually professional athletes. alongside my older brother, Adam. In 2015, he moved on to a new venture and I realized my true passion was in coaching, and thus, began pursuing it as a full-time career.

Since shifting focus, I have still served as an advisor to former clients from time-to-time, and have most recently added advising the families of girls high school and collegiate hockey players, as well.

Go into some depth regarding your hockey background as both a player and a coach:

I grew up in the Cooper Youth Hockey Association before playing for Robbinsdale Cooper High School. I had the opportunity to assist at my alma mater for five years before the co-op with Armstrong.

After leaving Robbinsdale I coached at St. Michael and Maple Grove. Coaching in the state tournament for the Crimson in 2012 was a highlight.

Following our achievements that season, I was offered an assistant coaching position with the Maple Grove girls varsity team. Shortly after accepting, I was introduced to Coach Pauly and presented with a unique opportunity to coach two different high school programs within the same season; as he offered me a position as a part-time practice coach, and social media coordinator on his staff.

I continued to coach with the varsity girls program at Maple Grove where we had some excellent teams that made two state tournament appearances. I really enjoyed coaching in the Maple Grove Girl’s program, but when the opportunity presented itself to join Coach Pauly’s staff at BSM I accepted.

What attracted you to the BSM staff:

Coach Pauly and his philosophy. From our first conversation, I felt like he got me, and I got him. The similarities between the beginnings of each of our coaching careers is amazing. He could relate to the miscues and ambitions of a young coach, and was able to provide great insight into how to achieve all the goals I had set for myself in the future.

Then there’s the actual hockey of it.

I always admired the freedom, creativity, and utilization of talent that the Red Knights played with, so to have the opportunity to learn from and work with the coaches who cultivate that style is exciting.

Everyone on staff here; whether it be coaches, video and content coordinators, or statisticians are all so dedicated to their responsibilities that it makes for a fantastic work environment, and one that I am inspired to keep pace with.

Talk about your role on the BSM staff and what you bring to that role:

My role on staff involves working primarily with the forwards and the power play, along with scouting upcoming opponents, and coordinating the BSM Boys' Hockey social media pages.

I am constantly studying new concepts, keeping pace with trends within the game, and finding ways to implement them within our style of play; an aspect that Coach Pauly has really encouraged me to expand upon.

I believe I can help enhance the Red Knight Hockey brand and style of play, and thus, increase the visibility of our players in the process.