Frattalone picks up second shotout of the season to backstop Red Knight victory.

The game was a goaltending duel between Olson and Charlie Frattalone, who, although only facing 15 shots, had to make several big saves to preserve the scoreless tie.

That tie was finally broken one minute, 47 seconds into the final period when Drew Stewart and Grant Ellings worked the puck up the left side. Ellings, from the left corner centered a pass to Mortenson coming down the slot and his shot found the back of the net before Olson could cross from left to right.

BSM was playing shutdown defense in the third period, only allowing one shot on goal, but it took them another seven minutes to get an insurance goal.

James Callahan moved the puck from the right point to Gavin Reed at the left point. Reed's shot was wide of the net but bounced off the back wall and out front to Stewart, and the freshman buried his sixth goal of the season.

The final goal for BSM came with 4:09 to play in the game when Peter Giertsen started a rush up the right side and got the puck to Aiden Wahlstrom, whose centering pass found Michael Risteau coming down the middle of the slot, from where he buried his third goal of the season. 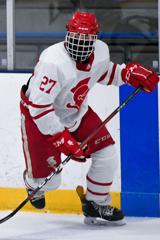 The game also featured an individual accomplishment as Callahan, the team's senior co-captain, played in his 100th career game. He joined the Red Knight defensive corps as a freshman for the 2017-18 season and has not missed a game during that time, playing in all 100 BSM games over the past four season.

The Red Knights begin Section 6AA playoff action Thursday, March 18, with the time and location of their quarterfinal game to be determined this weekend.