The teams traded first-period goals, with Ryan Baird and Quinn Schliesman scoring for the Red Knights but Liam Fronek scored the first of his two goals with 2:31 to play in the opening frame to send the hosts into the intermission with a 3-2 lead.

The Red Knights scored three times in the second period while Breenan Chapman, who started the period in a relief role, stopped all 16 shots he faced to give the visitors a 5-3 lead.

Schliesman scored just 42 seconds into the middle frame, his team-best 23rd of the season, before Charlie Hoch scored on the power-play at 9:06 and, just 27 seconds later, Carter Strom scored the first of his two goals in the game.

However, Eden Prairie quickly tied the score at 5-5 by scoring twice in the first four minutes of the final frame.

Strom's second goal, with 8:41 to play, gave BSM a 6-5 lead but the Eagles tied the score again with a power-play tally during a five-minute power-play.

The hosts then put the game away when Toran Dobchuk scored with 2:02 to play in the game and the Red Knights finally ran out of time.

Eden Prairie had a 46-38 advantage in shots on goals, which included a 13-6 margin in power-play shots.

Schliesman's 23 goals in 16 games give him the highest goals-per-game total (1.44 goals per game) in the 15 years that JV statistics have been compiled.

Mranwhile, three other players, Ryan Baird (15), Ben Norris (14) and Max Wendt (11) all reach double figures in goals in the shortened season while six players, who played at least 10 games, averaged better than a point per game. 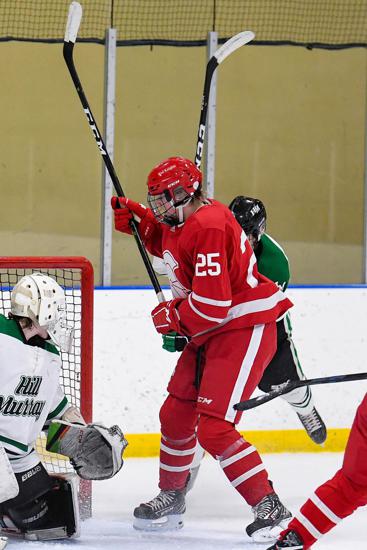 Quinn Schliesman scored two, giving him 23 in 16 games on the season, and added two assists.