Limesand records first shutout of the season to lead BSM past Blake.

ST. LOUIS PARK -- Carson Limesand, who is second on the school's all-time shutout list, recorded his first shutout of the season and Benilde-St. Margaret's opened Section 6AA playoff action with a 2-0 win over Blake.

Limesand only faced six shots in the first two periods while the Red Knights took a 1-0 lead when Grant Bisson intercepted a Blake pass in the the Bears' zone, moved it quickly to Adam Marshall, who then snapped off a shot from the left faceoff circle to give his team a lead at the 9:10 mark of the middle stanza.

Both teams ratcheted up their offensive games in the third period but the goalie were both up to the task as they faced a combined 29 shots on goal.

However, Limesand stopped all 15 shots he faced while Jonah Mortenson sealed the win with 1:41 to play when Drew Stewart's pass found him at the Bears' blueline. Mortenson then split the defense to break in alone before beating Blake goalie Aksel Reid, who stopped 30 of the 32 shots he faced in the game.

The victory moves BSM into Saturday's semifinals, where they will meet top-seeded Cretin-Derham Hall in a 2 p.m. matinee, Saturday, at Charles Schulz Arena in St. Paul. 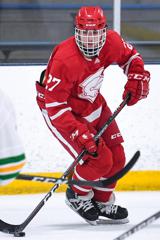 Jonah Mortenson had a career-high nine shots on goal and clinched the win when he scored with one minutes, 43 seconds to play.