The victory marked a pair of milestones for Limesand.

The victory was the 52nd of his career, setting the Red Knights' career record of 51, previously held by Jake Schuman.

He also tied Schuman with his 15th career shutout and has now posted back-to-back shutouts to get BSM to the section championship game.

After getting out-shot, 15-7, in the opening period, the Red Knights turned the tables in the second period with a 14-5 advantage. 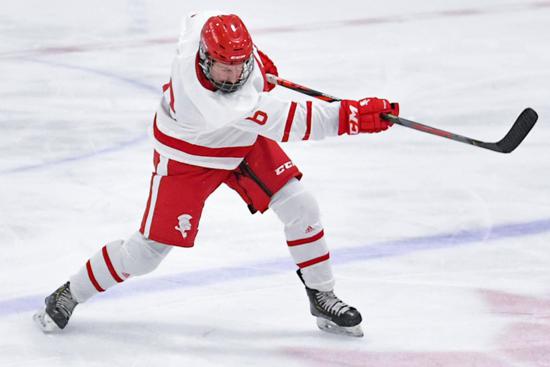 Tristan Sarsland's 11th goal of the season kicked off a three-goal third period.

Among those 14 shots was the game's first goal, nine minutes, 52 seconds into the frame.

The play started in the BSM zone when Gavin Reed flipped the puck up the left wing, where Adam Marshall picked it up in the Raiders' zone.

From there, Marshall skated the puck behind the net and came out the right side before making a backhand pass to the front of the net, where Asher Connolly was parked at the top of the crease and tipped the puck underneath the pads of Marko Belak.

Even though they were out-shot by a 22-9 margin in the final 17 minutes, BSM scored three times in the period, beginning with Tristan Sarsland's goal 3:53 into the final period.

He came off the bench as BSM was making a line change and raced into the CDH zone, intercepted a pass on the left wing, cut into the slot and beat Belak for his 11th goal of the season.

It took less than three minutes for the Red Knights to make it a 3-0 score when Brady Yakesh scored from the right point on the power play.

Jackson Bisson sealed the win with 25.9 seconds to play when James Callahan, after falling to the ice, moved the puck off the right-wing boards, where Bisson picked up the puck at his own blue line and raced up the right, beating the Raiders' defense before depositing the puck into an empty net.

Helping out the Red Knights was their special teams play. Going 1-for-3 on the power play raised their season efficiency to 28.8 percent, while the team's penalty kill was 3-for-3 and is now 61-for-65 on the season, a 93.8 percent efficiency.

The win advances BSM to its third consecutive Section 6AA championships against their third different opponent. The Red Knights will face second-seeded Wayzata, an 8-2 winner over third-seed Edina, Wednesday's game will take place at the Plymouth Ice Center with the start time slated for 7 p.m.