ST. LOUIS PARK, Minn. -- The Benilde-St. Margaret's varsity split its two games while the junior varsity provided the goal differential with two wins to give the Red Knights the championship in the inaugural Champions' Cup.

BSM, which won Tuesday with a pair of goals in the final minutes, saw the tables turned, Friday, when Zam Plante completed his hat trick with one minute, six seconds to play to give Class A No. 1 Hermantown a 6-5 win.

Saturday, the Red Knights got a goal from Tristan Sarsland, his second of the game, with 32 seconds to play to earn a 3-2 win to give the fourth-ranked Red Knights a 3-2 win over No. 16 Eden Prairie.

Plante not only scored late, he scored early, 59 seconds into the game to give the Hawks and early 1-0 lead.

Linemates Adam Marshall and Drew Stewart would each score in the next six minutes and BSM carried the 2-1 lead for 19 minutes, until Hermantown tied the game with 8:14 to play in the middle frame.

However, the Red Knights scored goals 49 seconds apart as Michael Risteau scored the first of his two goals and Adam Marshall scored his second of the game to give BSM a 4-2 lead heading into the final period.

The Hawks cut the lead to 4-3 just 59 seconds into the final period but, less than six minutes later, Risteau restored the two-goal lead with his third of the season.

Hermantown showed why it is the top-ranked team in Class A but persevering and tying the game with 8:24 to play before Zam Plante's game winner. 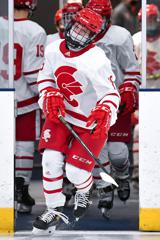 Michael Risteau scored twice, including a go-ahead third-period for the second consecutive game. 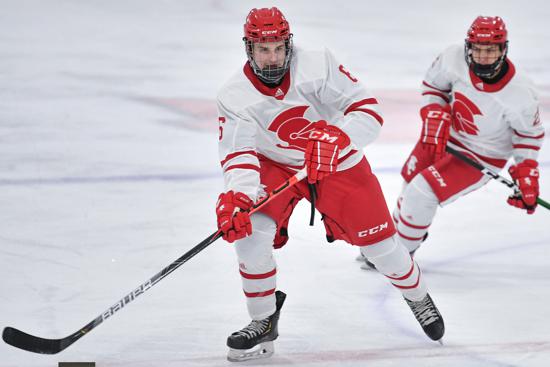 Tristan Sarsland scored two of the Red Knights' three goal versus Eden Prairie and was named the Youth Hockey Hub Player of the Game.

The Hawks dominated much of the game and it showed in the shot total as they held a 36-20 advantage, with Brennan Chapman turning aside 30 shots on goal.

Saturday, BSM faced an Eden Prairie team which had beaten them six straight times since the 2016-17 season.

The Eagles looked like they would make it 7-1 in a row as Jake Luloff sandwiched goals around Sarsland's first tally, taking a 2-1 lead into the first intermission.

The score would stay that way for just over 30 minutes before Sarsland's second goal gave his team its first lead of the game.

Next up for the Red Knights is a 7 p.m. contest, Wednesday versus Wayzata, which knocked them off in the Section 6AA title game last year.