ST. LOUIS PARK, Minn. -- It was a slow start for the third-ranked Benilde-St. Margaret's.

The third-ranked, 19-win Red Knights were out-shot, 13-11, in the opening period by eight-win New Prague.

But, thanks to Sam Schumacher stopped all 13 shots he faced and Adam Marshall scoring during a five-minute penalty kill, the hosts came out of the first period with a 1-0 lead, before putting their game together in the second period en route to a 7-0 victory.

With the win, BSM shares the Metro West Conference title with Chaska, marking the third year in a row, and sixth time in eight years, that the Red Knights have won or shared the league title.

BSM got things on track early in the second period with a pair of goals in the first three-and-a-half minutes.

The Red Knights took a 2-0 lead when Brendan McMorrow pounced on a Ben Norris rebound for his sevneth goal of the season, two minutes, 15 seconds into the second period.

Just over a minute later, Marshall made a pass across the slot from the left corner that was tipped to the point by Mason Stenger. Ben Thompson picked up the puck ripped a shot from the right point. Mitchell Dokman, picked up the rebound and scored his 13th goal of the season, and the first of his four points in the game. 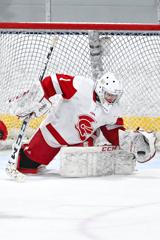 Sam Schumacher made 22 saves in collecting his third shutout of the season.

The middle of the period was dominated by the Red Knights, who had a 31-3 advantage in shots on goal in the period, but they were unable to expand the lead until 3:47 remained in the period when Dokman's shot from the right circle rebounded to Marshall on the left side and, from a sharp angle along the goal line, he found the top left corner.

With the game heading into the second intermission with the Red Knights lead, 4-0, they turned it into a five goal lead with 10 seconds remaining in the period as Dokman left a dropped pass for Bjorn Lervick just inside the Spartans' blue line.

Lervick quickly moved the puck to Stenger on the left wing and he proceeded to score on a wrist shot from the left circle.

Brady Yakesh sent the game into running time, 5:26 into the final period when he carried the puck up the left side and into the Spartan zone.

From there he cut to the middle of the ice and snapped off a shot from the top of the slot for his 10th goal of the season, giving the BSM a pair of 10-goal defensemen for the first time in school history.

To finish the scoring, and his third hat trick of the season, Marshall scored with eight seconds to play and the clock ran out.

After starting out slowly, the dominant third-period helped the Red Knights to 57-22 advantage in shots on goal, as Schumacher, making his third start of the season, picked up his third shutout and in four appearances this season, he has stopped all 59 shots he has faced.

BSM will find out its seed and the Section 6AA schedule, Sunday. The Red Knights will play a quarterfinal game with the time, location and opponent to be determined.