A four-goal first period began just 33 seconds into the contest as Mason McElroy moved the puck up ice to Tristan Sarsland on the right side. He immediately headmanned the puck to Mason Stenger in the neutral zone.

The converted defenseman, playing center, carried the puck into the Hopkins zone, split two defenders and his wrist shot handcuffed Royals goalie Jimmy Davis and found the back of the net.

It took less than two minutes for that lead to be extended to 2-0 when Caleb Koskie stepped around Davis to backhand a Ryan Gearen rebound.

The visitors kept their hosts at bay for the next 10 minutes before Michael Risteau took a pass from behind the net by Drew Stewart and his shot from the left circle made it a 3-0 game.

With just 50 seconds left in the opening frame, Stenger and Mitchell Dokman entered the Hopkins zone on a 2-on-1 rush with Dokman carrying the puck on the left side.

When he got to the top of the circle, he passed the puck across the top of the slot and Stenger snapped off another wrist shot for his fifth goal of the season.

Stewart then got into the goal-scoring act just 1:16 into the second period, catching the puck from a carom off the end boards when Davis misplayed the puck and then depositing it into the empty net. 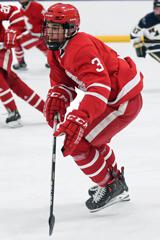 Mason Stenger scored 33 seconds into the game and added another late in the opening period.

Brendan McMorrow would go onto extend the lead to 7-0 when he scored a pair of goals 19 seconds apart and, when he assisted on Adam Marshall's power-play goal 50 seconds later, with 5:59 to play in the period, he had his 18th point in his last 10 games.

With the game in running time to start the third period, the Red Knights were limited to just a pair of goals.

Gino Gatti scored his fifth goal of the year at the 3:50 mark of the final period when Brady Yakesh threw the puck towards the net from the right corner and the senior winger tipped in the pass.

The scoring ended with 8:49 to play in the game when Gavin Reed picked up the puck behind his own net, skated it up the middle of the ice into slot in Hopkins zone before circling to the right side and passing the puck to Ben Thompson outside the top of the slot.

From there, Thompson stepped up and rifled a shot through traffic and into the back of the net for his second goal of the season.

The Red Knights clamped down defensively in the final period as well, allowing just one shot on goal while finishing with a 39-16 advantage in shots on goal.

McElroy recorded his fifth shutout of the season in addition to his 16th win, while also recording his first career assist.

BSM will now face fifth-seeded Blake, a 5-1 winner over Holy Angels, in Saturday's semifinals at the Bloomington Ice Garden. Game time is slated for 3 p.m.