BLOOMINGTON, Minn. -- Third-ranked and top-seeded Benilde-St. Margaret's scored three goals in a span of four minutes, 40 seconds in the opening period and Mason McElroy stopped 26 of 27 shots to make that lead stand up as the Red Knights advanced to the Section 6AA championship game with a 5-1 win over Blake.

The scoring started when Drew Stewart's pass from below the goal line on the right side found Tristan Sarsland open inside the blue line. The Mr. Hockey candidate then stepped up and rifled home his 12th goal of the season from outside the top of the slot to convert the team's first power-play chance of the game.

The BSM defense accounted for the team's first two goals when Gavin Reed's shot from just inside the blue line at the right point found its way through traffic and past Bears goalie Jordan Spaeth.

The three-goal outburst concluded when Ryan Gearen's shot from high in the right circle was stopped but Peter Giertsen crashed the net and pushed the puck into the net.

After the Red Knights held a 17-7 advantage in shots on goal in the opening period, Blake turned the tables in the second period, outshooting BSM, 13-9.

However, McElroy was key in keeping the Bears off the scoreboard as BSM maintained its three-goal lead into the second intermission.

After being held without a goal in the second period, it took just 15 seconds into the final period for the Red Knights to extend the lead to 4-0. 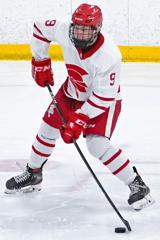 Adam Marshall registered three assists to give him a team-leading 47 points on the season. 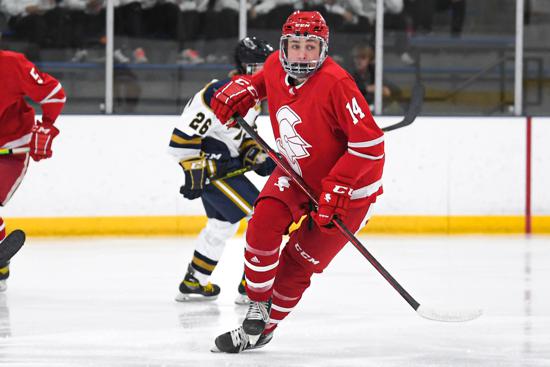 After winning the opening faceoff, the Red Knights got the puck deep in the Blake zone.

Blake gained possession of the puck but Marshall stole the puck on the left-wing boards, skated behind the net and left a pass in the slot for Mason Stenger, who proceeded to deposit his seventh goal of the season.

Down four goals, the Bears were not going to give up and they pulled Spaeth for an extra attacker with 6:41 to play in the game.

Although they applied pressure, attempting four shots, Reed knocked a puck loose which Stewart pick up behind his own net, stepped out the right side and, with an opening up the middle of the ice, he sent the puck the length of the ice and into the empty Blake net with 4:58 to play in the game.

The Bears would finally get on the scoreboard 59 seconds later when William Matzke won a faceoff in the right circle, pushed the puck through the skates of the Red Knight center and quickly wristed a shot past McElroy to finish the scoring for the night.

With the victory, BSM advances to its fourth consecutive Section 6AA title game, taking on Edina, a 1-0 winner in over Wayzata in overtime, in a 7 p.m. game at the Bloomington Ice Garden.