The Red Knights garnered two awards this season, sharing the Metro West Conference title, the sixth time in eight seasons they have either shared or won the title outright.

After finishing as the runners-up in Section 6AA, BSM was honored as the Section's Academic Champions.

Before individual awards were announced, participation certificates and varsity letters were awarded.

Dokman improved from five goals and seven points in 20 games as junior before exploding for 13 goals and 35 points this season, which included a team-leading five game-winning goals.

He also led the team in shot percentage (.277) while finishing second among the team forwards in plus/minus rating (+34). 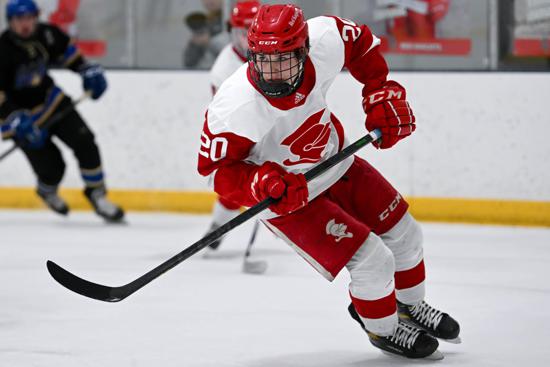 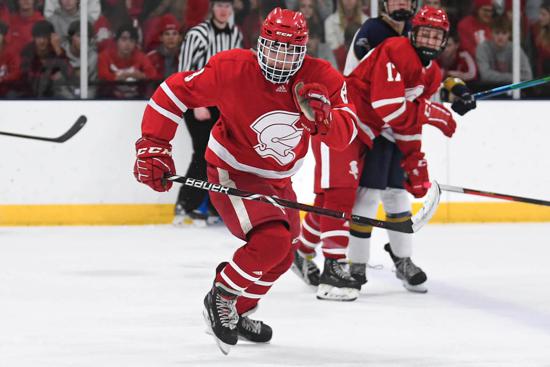 In his first full varsity season, Gatti proved to be a valuable asset while primarily manning the right wing on BSM's fourth line.

Gatti also saw time on the Red Knights' second power-play unit, averaging nearly a minute of ice time per game on the power play, and finished the season with five goals, 12 points and was +14 while playing all 28 games.

He recorded his first career multiple-point game and a career-high four shots on goal in an 8-0 win over Blake (12/23/21).

Gearen was a valuable asset while primarily centering the team's third line while also seeing significant ice time as one of the team's top penalty-killing forward.

Seeing action in all 28 games, Gearen contributed four goals and 13 points while posting a +20 plus/minus rating. He recorded a career-best two assists in a 3-2 win over then-6th ranked and Class AA state runner-up Maple Grove (12/29/21). 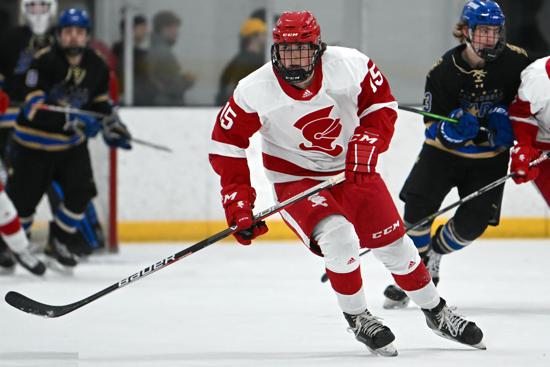 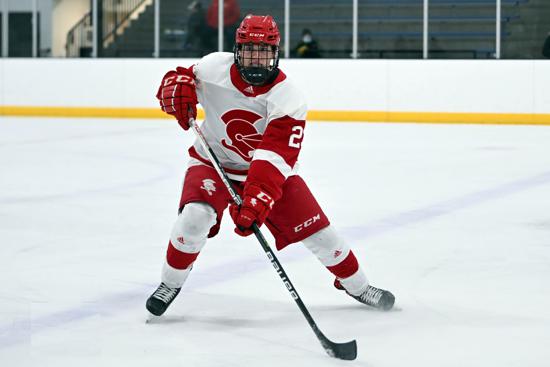 Giertsen had an expanded role as an assistant captain in his junior season and he responded.

Early in the season, he scored key goals in a 5-4 overtime win over Rogers, giving BSM a 3-2, second-period lead, and Maple Grove, the go-ahead goal in a 3-2 win, during the Tradition at the Park, capping a three-game goal-scoring streak.

Marshall finished his career on several of BSM's top 10 lists, joining some of the greatest players to don the Red and White. 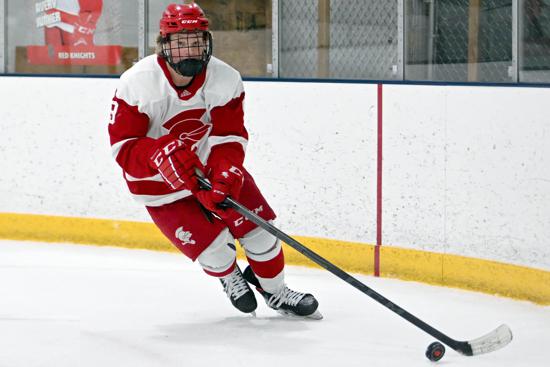 Marshall did not miss a game during his four varsity seasons, playing 105 consecutive games. 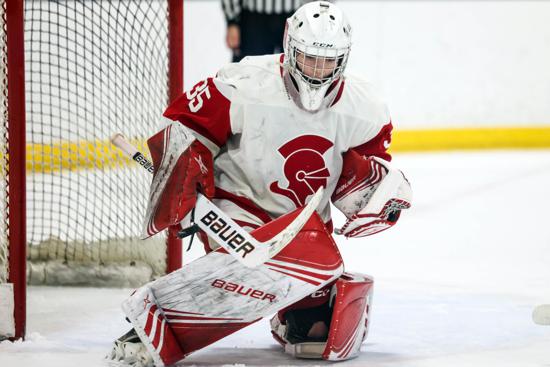 In his first season as a Red Knights, McElroy established himself as one of the state top young goaltenders, as he registered 17 wins and five shutouts to go with a 1.77 goals against average and a .926 save percentage.

His 17 wins tied for fourth in school history and his .926 save percentage also ranks fourth. McElroy's 1.77 GAA ranks sixth on the schools single-season list.

With 1121:46 played, he ranks ninth all time and his five shutouts are tied for second on BSM's single-season list.

McMorrow began his rookie campaign as a Red Knight by scoring four points in his first three games, and he only got better from there.

He put together a pair of five-game point-scoring streaks, a four-game streak and two three-game streaks, registering points in 20 of 28 games, while also seeing extensive time on both the power-play and penalty-kill units. 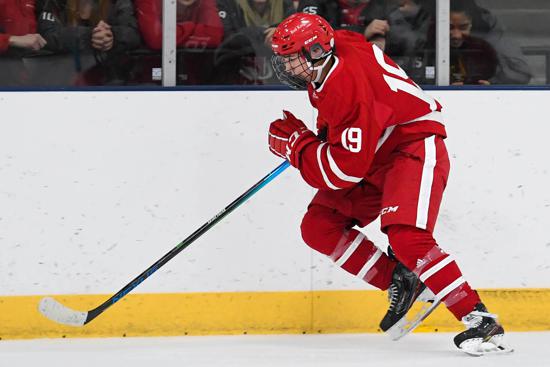 The sophomore forward finished third on the team in assists (23) and scored nine goals and 32 points, which included five goals and 23 points during a 19-game non-conference slate.

In his second varsity season, Reed went from a four-point rookie campaign, where he was -3, to a four-goal, 12-point sophomore season while posting a +23 rating.

He recorded a pair of multiple-point games on the season, including two assists and a career-high five shots on goal in a regular-season ending win over New Prague. 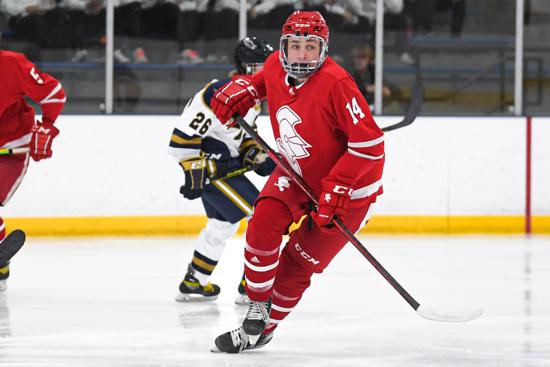 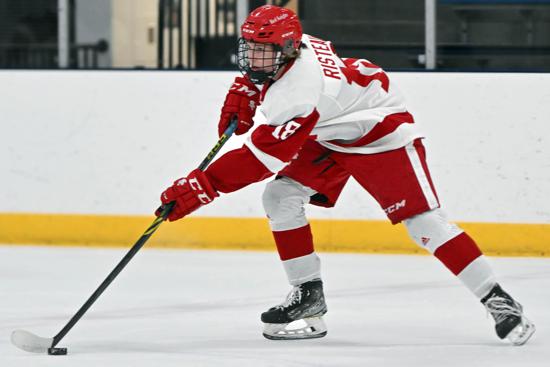 After scoring just three goals and seven points during his freshman season, Risteau established himself as one of BSM's top forwards by finishing second on the team with 15 goals while scoring 29 points in 28 games.

The second-year left wing was second on the team in goals per 51 minutes (2.00) and third in shots per 51 minutes (10.69) while also contributing two power-play goals and two-game winning goals.

Risteau recorded his first hat trick in a win at Waconia (1/31/22) and also had a career-high five points in the game. 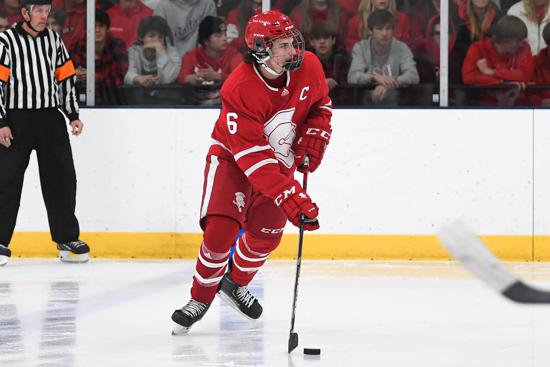 Sarsland scored 12 goals in each of the last two seasons, the first BSM defenseman in 10 years to score double-figures in goals in back-to-back season.

Sarsland's four power-play goals were second on the season and he led the Red Knights in power-play points (11) as well as blocked shots (34).

He is currently playing for the Midwest Division-leading Fairbanks Ice Dogs of the North American Hockey League. 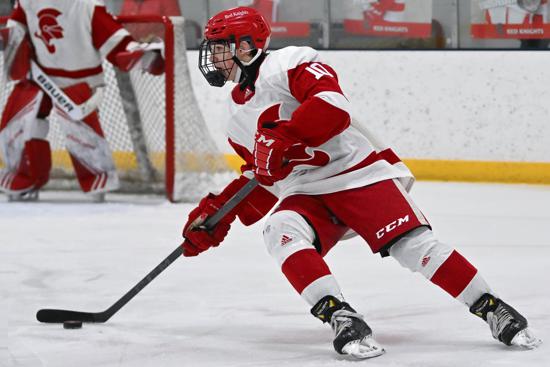 After turning in a nearly point-per-game performance as a freshman, Stewart followed up with 15 goals and 38 points in 25 games this season.

A top-six forward who centered both of the team's top two lines during his sophomore campaign, he proved to be a valuable asset as he won 357 of 559 (.639) faceoffs, led the team in power-play assists (9) and was second in power-play points (10).

Eleven of Thompson's 15 points in 2021-22 came in the final 11 games of the season as he finished his third, and final, varsity campaign on a strong note.

Thompson's lone goal of the season was the tying goal in a 2-1 win over 17th-ranked Stillwater at the Tradition in the Park. 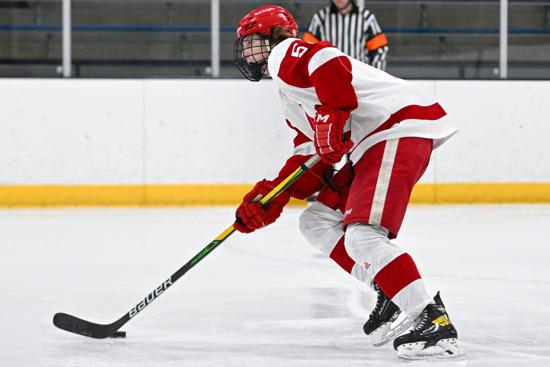 He tied a career high with three assists in a Section 6AA quarterfinal win over Hopkins, and had five points and was +15 in nine Metro West Conference contests.

In January, Thompson signed a tender with the Springfield Jr. Blues of the North American Hockey League. 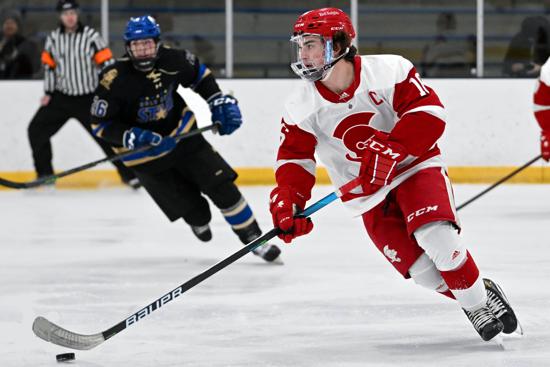 Yakesh proved to be one of the state's top defensemen and earned a number of accolades for his performance in 2021-22.

The senior captain opened the season with a three-point performance in a 5-3 win at Hill-Murray and went on to post 14 multiple-point performances as he played all 28 games for the Red Knights since his freshman campaign.

Yakesh is currently finishing up the season with the Chippewa Steel, for which he will play next season. He has made a verbal commitment to the University of Minnesota for 2023-24. 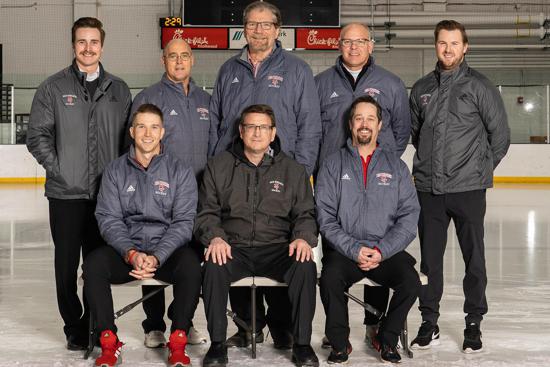 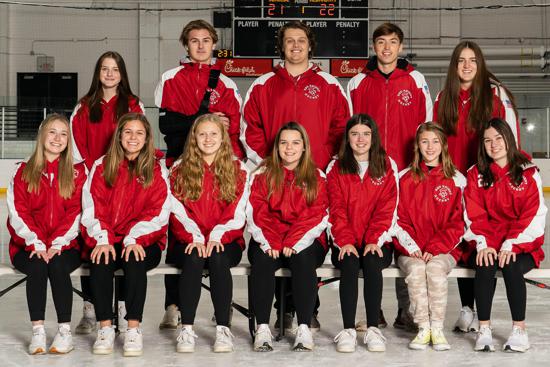 The captains for the 2022-23 season were announced at the banquest.

Peter Giertsen, who served as an assistant captain this past season during his junior season, will now wear a "C" on his jersey.

Joining him will junior varsity scoring leader Ryan Baird, who saw action in five varsity games this season, along with one the team's top players each of the last two seasons, junior Drew Stewart, who has been on of the team's top three scorers in each of those two seasons.

They will lead a group of 12 returning letterwinners in defense of the team's Metro West Conference championship. 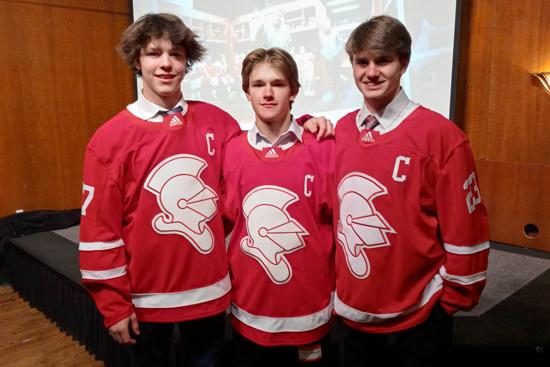