Junior-to-be to take part in Five Nations Cup next month.

COLORADO SPRINGS, Colo. -- Michael Risteau was selected as one of 20 players from the USA Hockey BioSteel Boys Select 16 Player Development Camp to represent the United States at the 2022 Athletix Under-17 Five Nations Tournament, Aug. 9-13 in Colorado Springs, Colo.

Last season, Risteau scored 15 goals and 29 points in 28 games, including his first career hat trick. His 15 goals were good for second on the team, as was his .190 shooting percentage.

The junior-to-be has played two varsity seasons and has 18 goals and 36 points in 47 career games.

Risteau is one of 10 high school players, and one of six Minnesotans on the USA roster.

The 2022 Athletix Under-17 Five Nations Tournament features, in addition to the United States, teams from Czechia, Germany, Slovakia and Switzerland in a round-robin format which will see the teams play four games in five days. 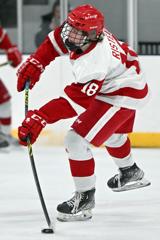 Michael Risteau record 29 points in 28 games for the Red Knights during the 2021-22 campaign.