Benilde-St. Margaret's will face a challenging schedule in 2022-23 with 11 of the state's top 20 Class AA schools, according to the MNHockeyHub.com's rankings, in which the Red Knights are ninth.

Unlike last year, BSM has a number of tough opponents at the back end of this season's schedule, in addition to the non-conference schedule to open the season.

"However, it will be beneficial to have some tough games on the back end as they are going to better prepare us for the section tournament." 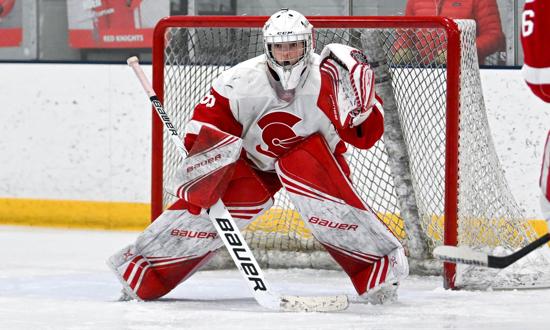 Mason McElroy's 1.77 goals against average last season was the best ever by a BSM sophomore goalie. 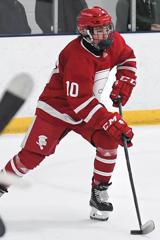 Drew Stewart scored 15 goals and 38 points in 25 games during his sophomore campaign.

The season gets underway with a pair of home games in the season's first week as Mahtomedi comes to the St. Louis Park Recreation Center, Tues., Nov. 29, for a 7 p.m. game.

A visit to Andover, Tues., Dec. 6, will be the first road game for BSM before home games with Wayzata and Cretin-Derham Hall.

The Red Knights have six of its fellow private schools on the schedule for this season and Cretin-Derham Hall kicks off a slate of four games in a row as BSM goes to Holy Angels and Blake before returning home for a Dec. 22 games with Hill-Murray to close out it's pre-Christmas slate.

A second meeting with Andover is slated kickoff the Tradition at the Park tournament, Dec. 27-29. The Red Knights will also face St. Louis Park in the event, which will count as a Metro West Conference game, and they will close out the tournament by facing Lakeville South.

The 2023 portion of the schedule gets underway with a pair of road games in the first week of the year. BSM will visit St. Thomas Academy, Jan. 5, and Moorhead, Jan. 7.

The second week sees a rarity as the Red Knights take on Chaska in a home-and-home series, Jan. 10 and 14, as the conference co-champions from last vie for early-season standing in the Metro West.

BSM then visits Champlin Park for the second consecutive season, Jan. 18, before beginning a four-game stand which will feature three MWC contests.

The home portion of the regular-season schedule concludes with Senior Knight as BSM hosts Eden Prairie in a 7 p.m. game, Saturday, Feb. 4.

The penultimate week of the season sees the Red Knights travel for three games, facing Orono, Feb. 7, before a Northern Minnesota road trip, Feb. 10-11, as they travel to Hermantown and Grand Rapids.

The season concludes with a pair of MWC games as BSM takes on Chanhassen, Feb. 14, and concludes the regular-season at New Prague, Feb. 17.

"The Metro West Conference continues to get stronger," Pauly said. "Chaska has emerged as one of the top programs in the Metro and Chanhassen is not far behind. 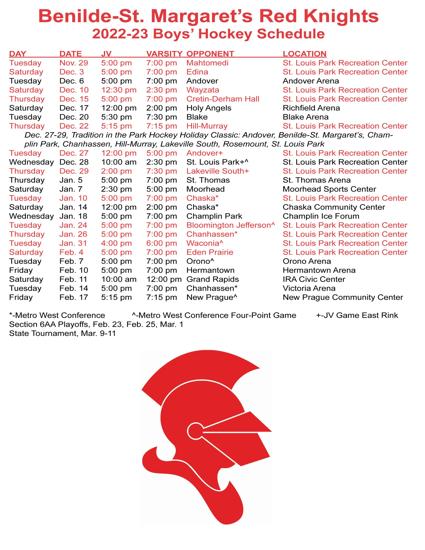 "Those four games will be very tough. St. Louis Park always gives us a good test and we will see them in the holiday tourney."

As always, the schedule promises to be one of the strongest group of opponents in the state.

"There are very few light games on the schedule," Pauly said. "We will once again boast one of the toughest schedules in Minnesota high school hockey."