BSM holds on for win over Irondale

After the visitors took a two-goal in the first period, the Red Knights got on the scoreboard when Pat Steinhauser blocked a shot inside the BSM blueline and Bryan Glynn picked up the puck in the neutral zone.

The senior left wing carried the puck up the left-wing boards, cut to the net in the faceoff circle and wristed a shot over the glove of Irondale goalie Lance Bortot.

Glynn evened the score less than two minutes later when John Duda passed the puck from the right faceoff circle and Glynn scored on his own rebound.

The Red Knights finally took the lead one minute, 44 seconds into the second period as Brett Patterson's cross-ice pass found Will Nelson alone in the left circle and he was able to beat Bortot on the stick side.

Despite outshooting Irondale, 16-1, in the period, BSM was unable to extend its lead until 1:42 remained in the middle frame. While killing a penalty, Patterson forced a turnover at the Knights' blueline and walked in alone. He deked to his backhand and brought puck to his forehand before putting the puck behind Bortot.

The score remained 4-2 until Irondale pulled Bortot for an extra attacker and Jimmy Gjere scored on a slapshot from the left point, after a faceoff win by Aaron Iverson, with 1:08 to play in the game.

Bortot finished the game with 33 saves while Rob Ankeny won his second game of the year for BSM with a 15-save effort.

BSM returns to action for another North Suburban Conference game Thursday, Jan. 8, when it hosts Spring Lake Park at 7 p.m. 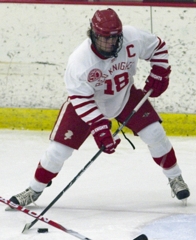