Michael Blessing scored two goals, assisted on another, and was on the ice for five of his team's eight goals as Benilde-St. Margaret's posted an 8-0 win Irondale.

The sophomore right wing set up the game's first goal as Alex Brask scored three minutes, 23 seconds into the contest. He then scored the first of his two goals just over two minutes later.

Oliver Shields-Nordness figured in the scoring on the Red Knights' next two goals. He set up Jeff Spellmire for a 3-0 lead with 1:01 to play in the opening period and then scored an unassisted goal, finding the back of the net on a short-handed breakaway, 1:15 into the second period.

That goal ignited a four-goal second period as Anthony Brask and Spellmire scored goals 1:13 apart and Blessing added his second goal at 8:42.

John Kernan finished the scoring with 4:11 to play in the game to cap the eight-goal victory.

BSM enjoyed a 54-8 shots on goal advantage with Blessing registering 10 shots and Spellmire nine to lead the way.

Adam Clark earned his third shutout of the season, and second in his last two starts, by making eight saves.

The Red Knights are in action again Thursday, Jan. 8, when they host Spring Lake Park. 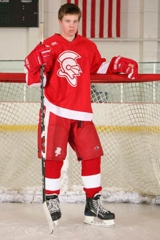