John Dwyer was the most valuable player of the 1974-75 BSM team while Jack, a three-sport letterwinner for the Red Knights, was a member of last year's team which played in the Class AA state tournament for the first time and finished third.

Duda, and his brother, John, a junior center, are second-generation Red Knights as both of their parents, Leon and Peggy, are BSM graduates.

Pat Cron is a second-generation Red Knight hockey player. His father, Bob, graduated from BSM in 1979 and went on to play hockey at St. John's.

Borer's family was in attendance. His sister, Melissa, is a junior co-captain for BSM's girls hockey team and Borer family has deep roots at Benilde-St. Margaret's.

It was not just alums who returned. Former head coach John Haider (1973-82) was in attendance. Haider was 103-87-5 in his nine seasons behind the bench and ranked as the winningest coach in school history for 16 seasons until Ken Pauly broke his record during the team's first state championship season in 1999-2000.

Charlie Burroughs was also in attendance. Pauly coached bantam hockey at Wayzata with him before they came to BSM, when Burroughs took over as the head coach for three season (1987-90) before turning the program over to Pauly.

"For 50 years students at BSM have been playing Red Knight hockey," Pauly said. "We have nearly 2,000 alumni who have skated for this school.

"We are proud of our alumni and it’s our goal to make them proud of us each night." 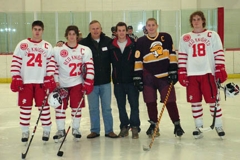