Christian Horn scored twice and Will Nelson's goal with five minutes, 28 seconds, remaining in the game prvoed to be the game winner as Benilde-St. Margaret's handed Minnetonka a 4-3 loss on the Skippers' home ice.

The hosts were in search of a measure of revenge for last year's 3-2 overtime loss in the Section 6AA final but they could never take the lead from their guests.

Brett Patterson opened the scoring just 4:21 into the contest when he took a Will Nelson pass from behind the net and scored from the left edge of the slot.

A series of three penalties found the Red Knights trying to kill a 4-on-3 Skipper power-play, which is when Sam Coatta's shot through traffic found its way to the back of the net to tie the game.

BSM took four penalties in the opening period but it was the only negative of the opening 17 minutes for the Red Knights.

"The way we came out in the first period was as strong an effort as I’ve seen out of our team this year," Red Knight head coach Ken Pauly said. "We were going to the body and making plays. It was good to see us dictate the pace right away."

BSM regained the lead 4:39 into the second period when Pat Borer's shot from the left point was blocked. Horn picked up the puck in the slot and dropped a pass for Pat Steinhauser, who shot from the left circle. Horn continued to the net and tipped the puck out of the air past the glove of Minnetonka goalie Jim Kruger.

It took the Skippers less than two minutes to respond, this time with a goal from Max Gardiner during a 5-on-3 power play.

The visitors would go into the second intermission with the lead, however, as Horn took a pass from Steinhauser to the left of the Minnetonka net and scored on his own rebound after Kruger had stopped his initial attempt.

"Christian Horn and Pat Steinhauser continue to get better each night," Pauly said of the youthful duo of freshman Horn and sophomore Steinhauser. "By the time they graduate they will be one of the top forward pairings in high school hockey."

The 3-2 lead lasted nearly 10 minutes into the final period when Erik Heskin fought off a backcheck and shot the puck past a screen in the low slot to tie the score for the third time.

Exactly two minutes later, at 11:32, Bryan Glynn picked up a loose puck in the neutral zone and gave it to Nelson as he crossed the Minnetonka blue line. Nelson then moved deep into the right faceoff circle and shot the puck over Kruger's shoulder from a low angle.

BSM held a 29-27 edge in shots on goal and Jacob Meyers, with a 24-save effort, moved into sixth place on the Red Knights' career wins list with his 21st.

"This is huge win for us as we go into the toughest stretch of the regular season," Pauly said after his team won the first of four consecutive games against ranked opponents.

"What I liked most was how we played the third period. Despite giving up the tying goal, Will Nelson made a big-time play and got the lead back. That’s what good teams do and that ‘s what we did tonight."

The Red Knights return home Tuesday, Jan. 13, when they take on second-ranked Edina in another rematch from last season, as the Hornets knocked off BSM in overtime in the semifinals of the Class AA state tournament in front of a crowd of 19,559. 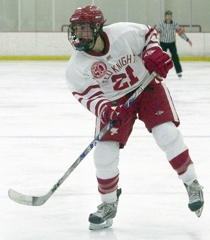