Owatonna Express forward Stephen Carew was honored by the North America Hockey League as its Sherwood/Central Division Player of the Week after scoring four goals as the Express skated to two wins.

Friday, the Eden Prairie, Minn., native scored twice in a 3-2 triumph over the Albert Lea Thunder. The following night, the 20-year-old potted two more goals as the Express doubled up the Alexandria Blizzard, 6-3.

The 2007 BSM alum, who is headed for the Air Force Academy next season, was also a plus-6 on the weekend.

"When a play needs to be made, Stephen just seems to have a knack to make that big play," Express head coach Pat Cullen said. "His mind for the game is so good."

Carew leads the league in shooting percentage, scoring on 34.4 percent of his shots on goal, and is tied for the NAHL lead with 22 goals. 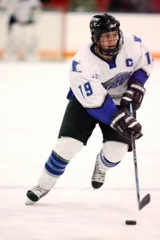