The Kelowna Rockets have announced that 20-year old goaltender Mark Guggenberger has been acquired from the Swift Current Broncos for a fifth-round Bantam Draft pick in 2010.

The 6-2, 208 pound Guggenberger is in his third season in the Western Hockey League. In 24 games for the Broncos this season he posted a 12-11-0-0 record with two shutouts.

Originally listed by the Portland Winterhaws, Guggenberger was acquired by the Broncos at the trade deadline last season. In his WHL career he has a 19-16-1-0 record with six shutouts.

"We felt we had a chance to get a year younger goalie who has had success in Swift Current ," said Rockets President/General Manager Bruce Hamilton. "It gives us more options going into next season at the goaltending position."

Guggenberger turns 20 years old today, but is eligible to return to the WHL next season for his official 20-year old season. He will join the Kelowna immediately and will be in the line up Wednesday night at Prospera Place when the Rockets host the Tri-City Americans. 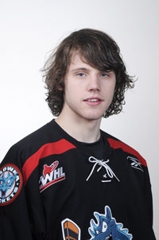