Chris Flood and Oliver Shields-Nordness both scored twice and tallied five points as Benilde-St. Margaret's claimed an 8-4 decision over Totino-Grace.

The duo set up the game's first goal, on the power play, when Shields-Nordness won a faceoff in the right faceoff circle in the Eagles' zone. Flood passed the puck across the ice to Ryan Minkoff, who blasted a shot from the left circle to put the hosts on the scoreboard six minutes, 49 seconds into the contest.

Flood and Evan Miller scored goals 37 seconds apart later in the period to send BSM into the first intermission with a 3-0 lead, which they extended to four goals when Shields-Nordness scored 3:11 into the second period.

Totino-Grace got the next two goals to cut the lead in half but Flood's second goal sent the Red Knights into the second intermission with a three-goal lead once again.

With another power-play late in the game, Totino-Grace pulled goalie Nate DeMuth for an extra attacker with 2:41 to play but Alex Brask was able to knock a loose puck to his twin brother Anthony, who crossed the Eagles' blue line and slid the puck into the empty net.

Luke McCormick picked up the win in goal for BSM, stopping 23 shots as the Red Knights held a 35-27 advantage in shots on goal.

BSM is in action for its final non-conference game of the season as the Red Knights take on Holy Angels, Saturday, beginning at 5:30 p.m., at Richfield Arena. 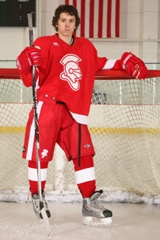