Late rally too little, too late for BSM

Benilde-St. Margaret's took a 2-1 lead through two periods but a goal by Brady Borer, three minutes, 43 seconds, into the third period enabled Totino-Grace to pull even with the Red Knights and, with four seconds remaining in overtime, Borer struck again to give the Eagles a 3-2 win at the St. Louis Park Rec Center.

It was the last North Suburban Conference loss for BSM for over two years but the Red Knights' 32-game conference winning streak came to a halt this evening as they scored twice in the third period but couldn't overcome a three-goal deficit and dropped a 4-3 decision to Totino-Grace.

The visitors recorded the game's first seven shots and got on the scoreboard just 2:23 into the contest when Nick Colpitts finished off a give-and-go play with Cole Salewski.

Colpitts and Salewski hooked up again, this time with Salewski potting the goal, as the visitors went ahead 3-1 with 29 seconds remaining in the first period.

"Too many times this year we have come out with very little energy," Red Knight head coach Ken Pauly said. "It was bound to catch up with us and it did tonight.

" Totino played with fire and we stood and watched. When you do that, you too often dig a hole that you can’t get out of."

DeLisle dug that hole a little deeper when Billy Heck's pass through the neutral zone split two Red Knights and sent Eagles' leading scorer on a breakaway. DeLisle deked BSM goalie Jacob Meyers to the ice and flipped a backhand shot past his glove for a 4-1 lead.

The hosts began their comeback bid early in third period while killing a penalty.

Christian Horn forced a turnover inside the Red Knight blue line and Pat Borer collected the puck and pulled up to take a slapshot after crossing the Eagles' blueline. Mike Nagel blocked the shot but Ben Sauer came in from the right side and slid the loose puck underneath Totino-Grace goalie Tyler Olson, 3:49 into the final period.

Although BSM controlled play for most of the final period, Olson and the Eagles kept them off the scoreboard until the game's final two minutes.

With another Totino-Grace power play winding down, Meyers deflected the puck to Christian Horn, who carried the puck all the way through the neutral zone as the Red Knight penalty expired.

Horn's pass split the Eagles' defense at their blueline and sent Brett Patterson in alone on Olson. A backhand fake got Olson to the ice and Patterson brought the puck to his forehand and tucked the puck inside the left post.

After a timeout and pulling Meyers for an extra attacker, BSM had two chances to score in the final minute but Borer had a shot blocked and Pat Steinhauser had a tip attempt hit the post with 39 seconds to play.

"The bright side is that we played a great third period," Pauly said. "Ben Sauer gave us life with his great hustle on the shorthanded goal.

"We have to remember the lesson but have a short memory on the loss as we have a big game with Holy Angels on Saturday. These type of games happen and we just need to move on."

Pauly and his 10th-ranked Red Knights play their final non-conference game of the year Saturday when they take on ninth-ranked Holy Angels. Game time at Richfield Arena is slated for 7:30 p.m. 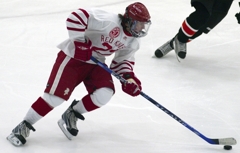