The game did not have a lot of action but was punctuated by a couple of flurries where all five goals were scored.

After the teams played to a scoreless draw through the opening period, the Stars struck first when Luke McNamara scored just 57 seconds into the middle frame.

That lead lasted just 11 seconds as Evan Peterson got a pass off the right wing boards from Ryan Minkoff and scored on his own rebound to tie the game.

Neither team scored again until Oliver Shields-Nordless lit the lamp 50 seconds into the final period and Sean O'Toole made it a 3-1 game, 33 seconds later.

Nick Sauro scored a power-play goal for the hosts at 3:59 to finish the scoring before the Red Knights held on, killing another penalty in the final four minutes, to secure their 19th win of the season.

BSM returns to action Tuesday, Feb. 17, for its final home game of the season, taking on Chisago Lakes at 5 p.m. 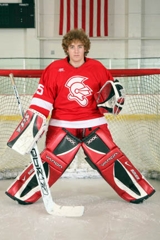