Former Benilde-St. Margaret's goalie Mark Guggenberger was named the Western Hockey League's top goalie for the week and was nominated for the Canadian Hockey League's ADT Goaltender of the Week award.

He was similarly honored in November while playing for the Swift Current Broncos.

Since being acquired at the trade deadline, Jan. 10, from Swift Current, Guggenberger has played in all 13 games for the Rockets, posting an 8-2-1-1 record with a 2.01 GAA and a .912 save percentage.

In his second season in the WHL, Guggenberger has been traded both seasons at the deadline and has proceeded to backstop his team into the playoffs. Last season, the Broncos acquired his rights from the Portland Winter Hawks.

Guggenberger has one remaining season of junior eligibility and is NHL-draft eligible this year. 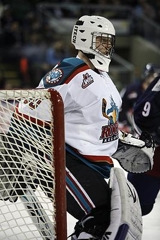