Benilde-St. Margaret's took nearly 10 minutes to get its offense unlimbered but the Red Knights scored seven goals in an 11-minute span en route to an 8-0 win over Chisago Lakes.

There was only one stoppage of play in the game's first eight minutes as the game remained scoreless through nine minutes.

Even Petersen finally broke the ice at 9:28 and Anthony Brask followed that just 19 seconds later.

John Kernan and Oliver Shields-Nordness scored two minutes apart as the period came to a close with the hosts holding a 4-0 lead.

Chris Flood then opened the scoring 1:15 into the second period with a short-handed goal and Taylor Topousis, who assisted on three of the first five goals, scored a power-play goal at 3:22, followed just over two minutes later by a Michael Blessing tally.

The game settled down after that and only Ryan Minkoff's goal, with 28 seconds to play in the middle stanza, added to the score.

Blessing, like Topousis, had a goal and three assists in the win while Sean O'Toole chipped in with three assists.

Adam Clark notched his 14th win and sixth shutout of the season by stopping 10 shots.

BSM closes out its season Thursday when it plays Robbinsdale Cooper at New Hope Arena. The opening faceoff is slated for 5 p.m. 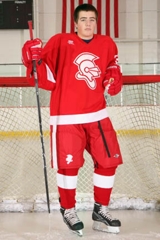