Recent events have Red Knight alums busy in the pros.

Johnny Austin ('14) became the latest Benilde-St. Margarets' alum to sign a profession contract when he inked an Amateur Tryout Agreement with the Laval Rocket of the American Hockey League, the top minor league affiliate of the Montreal Canadiens.

A Reed Lawson Award finalist in 2014, Austin spent two seasons as a Red Knights, scoring nine goals and 51 points while serving as a co-captain as a senior in 2013-14

Austin made his debut, Friday, with the Rocket and had an assist in Laval's 3-2 overtime loss to Charlotte and recorded three shots on goal in Saturday's 5-3 loss to the Checkers. 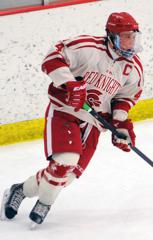 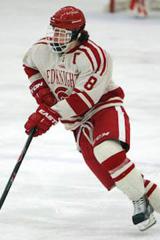 Spencer Naas was a Mr. Hockey finalist in 2014.

Friday, Naas signed an ATO and joined the Cleveland Monsters of the AHL, the top affiliate of the Columbus Bluejackets, immediately making an impact as he scored a goal and recorded a game-high five shots on goal in his professional debut, Saturday, a 4-3 overtime loss to the San Diego Gulls.

During his BSM career, Naas recorded back-to-back 30-goal and 60-point seasons, tallying 65 goals and 125 points in 55 career games, earning second-team All-Metro honors as a senior when he was a Mr. Hockey finalist.

Naas went onto a four-year career at UConn, which he recently completed by sharing the team lead with 12 goals while tallying 24 points in 36 games. For his four-year career, he scored 49 goals and registered 77 points in 143 games for the Huskies.

Grant Besse ('13) was leading all East Coast Hockey League rookies in goals (30) and points (62), while ranking second in assists (32) in 62 games before signing a 25-game Professional Tryout Agreement with Cleveland, joining for Red Knight teammates Ryan Collins and Spencer Naas as a member of the Monsters.

Besse had a legendary career at BSM as he set school records for career goals (163) and points (272), and finished fifth all-time in Minnesota high school in goals and seventh in points.

He capped his junior season in 2012 by scoring all five Red Knight goals in a 5-1 win in the Class AA state championship game, the last three of which were short handed, before a senior season which saw him earn Metro Player of the Year and Mr. Hockey awards.

He then spent four seasons at the University of Wisconsin, serving as an assistant captain his final two seasons while finishing with 39 goals and 97 points in 138 career games.

A fifth-round draft pick (147th overall) of the Anaheim Ducks in 2013, Besse signed with Norfolk prior to the 2017-18 season and was an ECHL All-Star, scoring five points in the league's All-Star game. 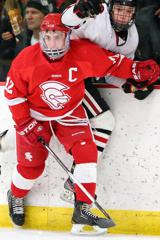 Grant Besse record 162 goals and 272 points during his four-year career at BSM. 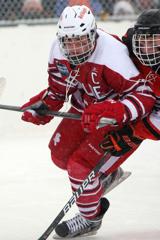 T.J. Moore ('13) was the first of three BSM alums to sign an ATO following the conclusion of his collegiate career this year, as he signed with the Norfolk Admirals and joined former Red Knights teammates Grant Besse and Christian Horn.

Moore had four shots on goals in his pro debut and has now scored two goals and three points in six games for the Admirals, including a goal, Friday, and an assist, Saturday.

During his four seasons at BSM, Moore tallying 70 goals and 163 points, ranking fifth all-time in both categories while record 93 career assists to rank fourth.

After an injury-shortened 2013-14 season with Chicago of the United States Hockey League, Moore went onto Holy Cross, where he finished his career this season, leading the team with 22 assists while recording 30 points in 36 games. He scored 47 goals and 106 points in 133 career games for the Cruasders.

Christian Horn ('12) capped off his four-year BSM career by setting the school's all-time scoring record, becoming the first player in BSM history to top the 200-point mark, with 207 points.

He played one season in the USHL, scoring 23 goals and 47 points in 50 games with Tri-City and Sioux Falls before finishing his collegiate career with two seasons at St. Lawrence, where he notched 11 goals and 26 points in 62 games.

He is now in his third professional season, having joined Grant Besse in Norfolk in December and he has scored 14 goals and 29 points in 40 games since that time.

He joined the Pensacola Ice Pilots of the Southern Professional Hockey League for four games in 2015-16 following his final season at St. Lawrence. Horn then split the 2016-17 season between the Fayetteville FireAntz of the SPHL and the Rapid City Rush of the ECHL.

He started the 2017-18 season with Peoria of the SPHL before signing with Norfolk. 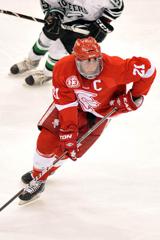 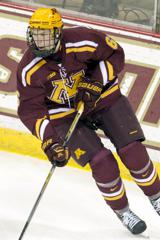 A second-round draft pick (47th overall) of the Columbus Bluejackets, Ryan Collins is in his second season with the Cleveland Monsters, where has been joined by former Red Knights Grant Besse and Spencer Naas this week.

Collins scored a goal and added six assists in 22 games as a sophomore at BSM during the Red Knights' run to the 2012 state title.

He then moved on to spend two seasons with the National Team Development Program and then spent three seasons with the University of Minnesota, scoring four goals and 22 points in 98 career games before signing an ATO at the conclusion of the 2016-17 season.

The 6 foot, 5 inch, 204 pound 21-year old has eight points in 51 games with Cleveland, including seven points in 46 games this season.